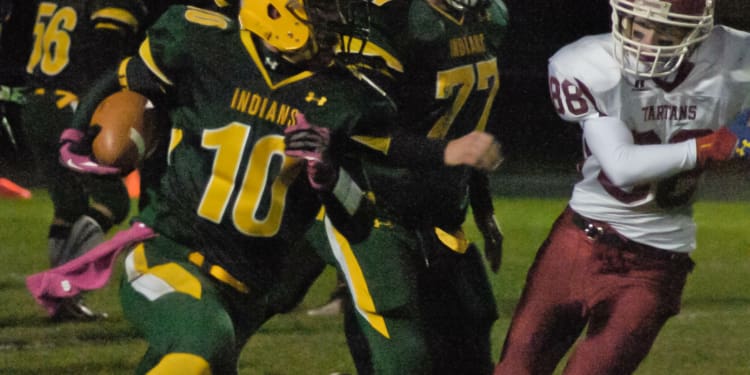 Whenever the Ravena-Coeymans-Selkirk football team needed a big play, David Warnken made it.

The junior quarterback rushed for 155 yards and a touchdown, threw a critical scoring pass and intercepted a Dan Zeglen toss in Ravena’s 22-12 victory over Scotia-Glenville in Friday’s Section II Class B quarterfinal game.

Warnken’s interception came at a critical juncture of the game. The visiting Tartans (5-3) were driving deep in Ravena territory when Warnken picked off Zeglen near the goal line and returned the ball to the Indians’ 5-yard line.

`They kind of shot themselves in the foot with a penalty (on the play before), and they had to throw the ball,` said Ravena coach Gary VanDerzee. `David came up big with that interception.`

`We always talk about the momentum of the game, and that gave them the momentum,` said Scotia-Glenville coach Kevin Warren.

The Indians (6-2) took up the remainder of the first quarter running the ball through Scotia-Glenville’s defense. Warnken had a 29-yard gain on fourth down near midfield and a 20-yard run to the Tartans’ 3-yard line before plunging into the end zone for Ravena’s first touchdown of the night.

`We’ve had a lot of 90-yard and 80-yard drives this season,` said Warnken. `If we just got one tonight, we knew that would turn the game in our favor.`

Ravena’s second offensive series started badly when junior tailback Fred Pechette injured his right ankle. However, senior tailback Zach Maurer came in and made an immediate impact with several key runs, including a 3-yard touchdown scamper up the middle with less than four minutes left in the second quarter. Warnken added a two-point conversion run to give Ravena a 14-0 lead.

`Zach had a great game filling in for Freddy,` said VanDerzee. `He’s done this sort of thing before. He had a 200-yard game against Albany Academy earlier this season, and he’s a powerful runner.`

Zeglen connected with Colin Evers on a 31-yard touchdown pass later with less than two minutes left in the first half to get Scotia-Glenville on the scoreboard. The Tartans missed the extra point, though, which allowed Ravena to enter halftime with a 14-6 advantage.

The score remained that way until the midway point of the fourth quarter when Warnken hit Josh Hall on a 9-yard touchdown pass. Maurer added a conversion run to put Ravena ahead 22-6.

Zeglen needed less than three minutes to get Scotia-Glenville into the end zone. He completed several passes before connecting with John Clark on a 5-yard touchdown strike with 2:32 left. However, Zeglen’s conversion pass attempt was batted down in the end zone, which left the Tartans with a 22-12 deficit.

`If we convert on our conversion play at 22-12, it makes it a one-score game,` said Warren.

Ravena recovered Scotia-Glenville’s onsides kick, and the Indians collected a pair of first downs to seal their quarterfinal victory.

The Indians travel to West Division champion Schalmont (8-0) next weekend with a berth in the Class B Sectional finals on the line. Ravena lost to the Sabres in last year’s semifinal round.