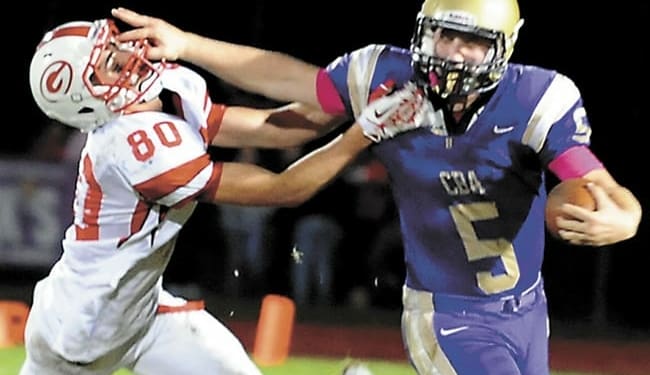 By doing something no one else had managed to do all season, the Christian Brothers Academy football team accomplished something it hadn’t done since classification play began in Section II.

Saratoga Springs (5-1, 6-1) helped CBA lock up first place by knocking off Shenendehowa 33-6 last Friday. Shen (3-2, 4-2) was the only team that could have denied CBA the division title in a head-to-head tiebreaker, thanks to a 35-21 victory over the Brothers in Week 2. CBA owns a 34-21 win over Saratoga and now a 34-point victory over Guilderland.

To beat Guilderland convincingly, CBA blitzed Dutchmen quarterback Frank Gallo early and often. The Brothers sacked Gallo six times in the first half, one of which resulted in a fumble that led to the second of CBA’s four scoring drives before halftime.

“Our defense was awesome all night,” said CBA coach Joe Burke. “It just felt like (Guilderland) didn’t get a whole lot of yards.”

“Credit their defensive line. They have a fast defensive line,” said Guilderland coach Dan Penna. “It’s a team game, though. We didn’t do a good job of protecting our quarterback.”

Croskey was a big part of CBA’s effort on both sides of the ball. Besides scoring three touchdowns and gaining 186 total yards, Croskey had four of the Brothers’ seven total sacks of Gallo.

“Frank Gallo is a good player,” said Croskey. “We knew we had to get pressure on him.”

“The defensive stuff is what I’m most proud of because Elliot is a big time player,” said Burke.

Another big defensive play gave the Brothers the upper hand on Guilderland. On the Dutchmen’s fourth play from scrimmage, Gallo launched a high pass towards his top receiver, Jake Smith. Smith leaped for the ball, but it bounced off his fingers and into the waiting hands of CBA defensive back Ben Anthony. A penalty against the Dutchmen set the Brothers up at Guilderland’s 43-yard line.

CBA wasted little time taking advantage of its great field position. Nick Marini broke free for a 31-yard touchdown run on the Brothers’ fourth play from scrimmage to make the score 7-0 less than three minutes into the first quarter.

“That interception definitely gave us momentum,” said Croskey. “It gave us energy and set the tone for the rest of the game.”

Guilderland’s second series ended when Gallo fumbled the ball as he was sacked. CBA recovered the ball at the Dutchmen’s 31-yard line, and Croskey scored from there two plays later to put the Brothers ahead 13-0.

CBA’s next two touch-downs came courtesy of the halfback option pass. Marini connected with Alex Koshgarian on a 26-yard scoring strike late in the first quarter, and Donald Vivian hit Croskey on a 32-yard touchdown pass with 1:05 left in the second quarter.

“Those types of plays are real important,” said Marini. “If you can get a team to trip themselves up, then you can keep the momentum going.”

Guilderland was certainly fooled on Vivian’s touchdown strike to Croskey. With no one near him, Croskey had time to stop, go back to catch the pass before it hit the turf, turn around and run into the end zone untouched.

While the halfback option pass was working for CBA, nothing was working for Gallo and the Guilderland offense. Even when it appeared that the Dutchmen gained some traction with a big play, they’d slip up again. In one instance, Gallo connected with Smith on a 45-yard pass to bring the Dutchmen to CBA’s 18-yard line with 7.4 seconds left in the second quarter, but the Brothers sacked Gallo on the next play to end the half.

“I’m proud of the way our team has played all season, but tonight we made mistakes that we hadn’t made all year,” said Penna.

CBA started the second half the same way it started the first half – with a touchdown. This time, quarterback Joe Kolbe hit Croskey with a 45-yard scoring strike to put the Brothers ahead 33-0.

Guilderland ended CBA’s shutout bid midway through the third quarter with an 86-yard drive capped by Gallo’s 35-yard touchdown pass to Smith, but Marini tacked on a nine-yard scoring run before the end of the period to give the Brothers their final margin of victory.

Croskey rushed for 109 yards and added 77 yards on his two touchdown receptions, while Marini gained 108 yards for CBA.

The Brothers finish the regular season Friday when they visit LaSalle for a cross-divisional game, while Guilderland battles Saratoga Springs to see which team finishes second in the Empire Division and gets a home playoff game for the Class AA tournament.