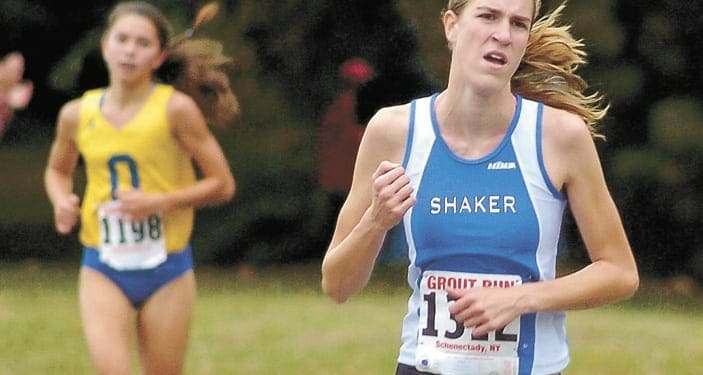 Maryanna Lansing did it again.

The Shaker sophomore held off a late charge from Queensbury’s Megan Kellogg to win her third straight Grout Run title Saturday at Schenectady’s Central Park. Lansing finished with a time of 15:49.87, nearly nine seconds ahead of Kellogg.

“It’s fun to do well and be up there winning again,” said Lansing.

Kellogg was closing the gap on the final hill when Lansing started hearing people urging her to run faster. Lansing heeded the calls and turned on her afterburners, leaving Kellogg far behind by the time they reached the bottom of the hill.

“I just had my parents and all my teammates telling me she was gaining on me,” said Lansing.

Queensbury got the final say in the team standings, though. The Spartans edged Shaker 33-36 to finish first in the Division I race.

“We didn’t win the team title, but our young girls are coming through for us,” said Shaker coach Marbry Gansle.

Colonie claimed the Division II girls title with ease. Five runners placed in the top 10 to give the Lady Raiders 29 points, 31 points ahead of runner-up Bethlehem.

“This is the first time we’ve run really well, except for dual meets,” said Colonie girls coach Frank Myers. “This is the only (invitational) where we did what we should have done.”

“She’s one of the best runners on Long Island, and we stayed pretty close to her (Melly),” said Myers.

The boys Division I race turned into a crosstown battle between Shaker and Christian Brothers Academy. CBA had the top individual runner in Justin Van Epps, but Shaker had the tighter pack as the Blue Bison defeated the Brothers 34-46 for the team title.

“The kids ran very well,” said Shaker coach Ed Springstead. “Five guys (finishing within) 24 or 25 seconds, that’s what you’ve got to do.”

Van Epps earned his second invitational title of the season with a first-place time of 13:43.90. Washingtonville’s Daniel Guzman was a distant second with a time of 13:56.36.

“Everyone was yelling at me to catch the (pace) truck (at the end), so I went for it,” said Van Epps, who used a late surge to seal the victory.

“Hausamann has had trouble with his knee and he hadn’t been finishing races, but he was fine today,” said Springstead.