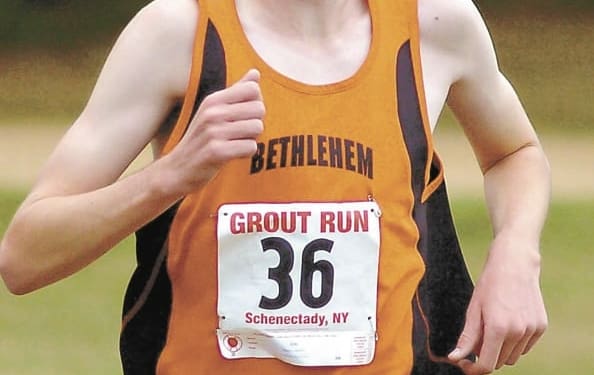 Now, the Bethlehem senior can claim he’s a repeat champion at an invitational.

Booker pulled away from Middletown’s Alex Shodai on the final stretch to win his second Grout Run title Saturday at Central Park. Booker won the Division II race with a time of 13:23.30.

“This was my first (career) invitational title last year, so it’s awesome to come back and do it again,” said Booker.

Shodai was gaining on Booker as they ascended the final hill leading toward the finish line, but Booker turned it up a notch and defeated Shodai by 8.46 seconds.

Booker said his goal wasn’t trying for a good time on the road course at Central Park. His concern was about leading Bethlehem to a team title.

“I sacrificed myself to help the team,” said Booker.

Bethlehem fell short of winning the Division II team title, though. Niskayuna placed four runners in the top 12 to edge the Eagles 48-52 for first place.

The Bethlehem girls team also turned in a second-place finish with 60 points at the Grout Run, although head coach Jack Rightmyer said he was expecting it with lead runner Danika Jensen missing the race to take the SAT.

“We didn’t have our top runner today, but everyone else did very well,” said Rightmyer of the Lady Eagles, who finished behind Colonie in the team standings. “I was very happy with our pack.”

Ravena-Coeymans-Selkirk also sent its cross country teams to the Grout Run. The boys team placed seventh in the Class C race with 200 points, while the girls team only had four runners and didn’t qualify for the team title.

Angel Colon had the top individual performance for Ravena at the Grout Run. Colon took seventh place in the boys Class C race with a time of 14:38.93.