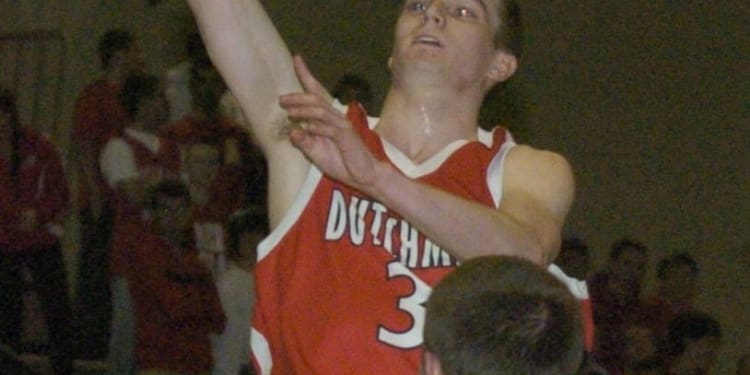 The Brothers out-scored the Dutchmen 30-16 in the second half to pull out a 55-41 victory in the final Section II Class AA boys basketball quarterfinal game played Saturday night at Hudson Valley Community College.

The game didn’t start until nearly 9 p.m., as it was the last of six Sectional games played at HVCC. The day started with two Class C games before the first of four Class AA quarterfinal contests began shortly after 3 p.m.

Guilderland (13-7) seemed to have more energy than CBA (18-2) in the first half, as the Dutchmen traded baskets with the Big 10 champions. Even so, the score was tied at 25 going into halftime.

Guilderland scored the first two points of the third quarter to take a 27-25 lead. But CBA went on a 10-0 run to pull ahead by eight points, and the Dutchmen never threatened again.

`They caught us sleeping on defense in the first half, but I was happy to see our kids make the necessary adjustments in the second half,` said Doemel.

`It’s a good team,` said Guilderland coach Ron Osinski. `We gave them our all. We didn’t die out there. We held them to 50-something points. We just couldn’t get anything to fall in the second half.`

Greig Stire led a balanced CBA attack with 11 points. Tyrell Ramsey contributed 10 points, while Drew Brundige hit a pair of three-pointers in the fourth quarter on his way to a nine-point night.

`Coach just told us to slow it down (in the second half) and look for open shots,` said Stire.

Bethlehem (17-3) had a 51-48 lead on Troy late in the fourth quarter, but the Flying Horses (17-3) scored seven of the final nine points of the game to pull out the victory. Jerrell Reid’s three-pointer put Troy ahead for good.

Awaiting the Flying Horses in Thursday’s semifinal round at the Times Union Center is Shaker. The Blue Bison (18-2) advanced to their second consecutive Final Four appearance by knocking off LaSalle.

`We know they’re a very good team, and we can’t expect anything less than that,` senior forward David Morrison said of Troy, which beat Shaker in last year’s Sectional semifinals.

Shaker had a difficult time with LaSalle (13-7) in the low post, as the Cadets consistently pestered any Blue Bison who had the ball near the basket. But once Andrew Holmes drained three consecutive three-pointers in the last two minutes of the third quarter, Shaker had enough of a cushion to glide by LaSalle.

`We wanted to get him shots, and obviously he has the confidence to make them because he took them,` said Shaker coach Jeff Holmes.

Maurice West scored 17 points to lead Green Tech past Shen (13-7) and into Thursday’s other semifinal game against CBA at the Times Union Center. Jake Hicks had 16 points for the Plainsmen.