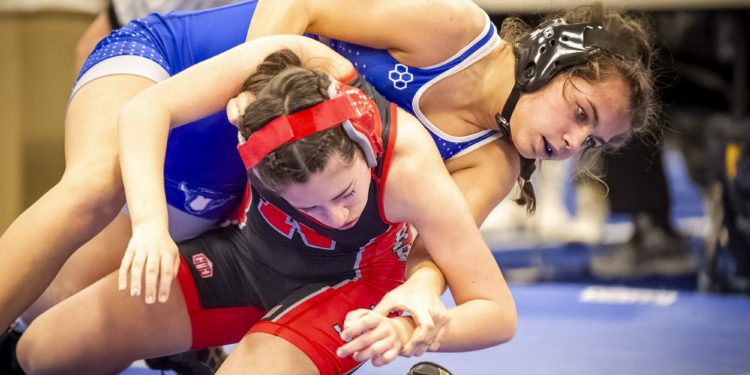 LATHAM — The wrestlers jogged into the F-gym at Shaker High School on Wednesday to form a circle around the wrestling surface before performing the Bison’s pre-match warm up ritual in front of the cheering full-house crowd.

It looked just like old times for Shaker wrestling, but it wasn’t. This never happened before.

The wrestlers are combined athletes from Shaker and Colonie, they were all girls hosting a dual team competition against other girls from a combined team from Niskayuna and Schenectady.

The first of its kind in Section II athletics’ history.

This year, girls wrestling was granted emerging-sport status by the New York Public High School Athletic Association this school year and that changed everything.

“We started meeting this summer because we had a feeling that this was going to be the year,” Shaker-Colonie Girls Wrestling head coach Lisa Anson said. “We held informal practices so the girls could see what this was like. We had to be proactive about it.”

In the past, the only way for girls to compete in high school teams was as a member of a boys’ team. Three of the girls currently on the team have wrestling experience, the rest are learning.

“Physically it is better (wrestling against girls) because it is not as intimidating as wrestling boys. That is why there are so very few girls on boys teams,” Anson said. “Now there is an easier route to get females involved in wrestling. If you did not grow up in a wrestling household like I did, it was a barrier.”

Anson said today’s wrestlers will have greater access to college scholarships and the opportunity to go to the next level with their own teams.

Anson wrestled with the Colonie boys team throughout high school and placed fifth in the Section II individual tournament her senior year in 2010 Although she is not new to the wrestling mat, this is her first coaching role. Shaker Athletic Director Matthew Stein said she was a natural fit.

“Lisa wrestled for me when I coached at Colonie and had real success,” Stein said. “When this (girls high school wrestling) movement started, I involved myself with the discussions and last year we were seeing that it may come to fruition.”

Last spring Stein made a budget request to add girls wrestling as a sport and when that was approved, he said that move helped make it a reality.

Shaker High boys coach Brandon Guthrie worked with about 20 girls who were interested in wrestling by hosting open-mat events and clinics so they were already exposed it before Section II formally sanctioned the sport, Stein said.

Two sports received emerging status for the 2022-23 season from NYSPHSAA and one made it to a full championship status.

According to Watson, in order for a sport to move up to championship status — allowing competition for a state championship — the sport needs at least six sections participating statewide and a minimum of four teams in each section.

This season there are more than 10 girl wrestling teams in Section II, many of which are combined from multiple schools.

“The deadline for merging sports and registering is August 1 for winter sports.” Stein said. “We have an intermunicipal agreement with Colonie to join forces to share all costs, but we are just not merged for competition this year. Colonie wrestlers compete as Colonie and we as Shaker.”

There are two Colonie girls on the team and Anson sees no difference what school they are from.

“The girls come to wrestle and we all train together, we are one,” she said. “They have to have exhibition matches during dual meets, but in tournaments they will be able to participate as their home school.”
This season, NYSPHSAA has a tournament planned just for Girls Wrestling.

“Girls Wrestling will have an invitational event this winter, January 26th in Syracuse. The day before the boys’ dual meet wrestling championships,” Watson said.

Last winter, Section II held a tournament at Coxsackie-Athen high school for girls that were part of boys teams. It was the first of its kind in the Section.

The dual meet against Niskayuna-Schenectady was the first time two girls teams met to match up, according to Stein. They decided not to use team scoring, focusing instead on getting as many girls on the mat as possible.

“They all need experience and that is our goal,” Stein said. “As long as they do not hit the maximum number of matches for the season, we will wrestle as much as and however we can.”

Results from the Dual meet at Shaker on November 30.

To open the photos gallery of the event click here or click on a photo below to swipe/click through the rest.