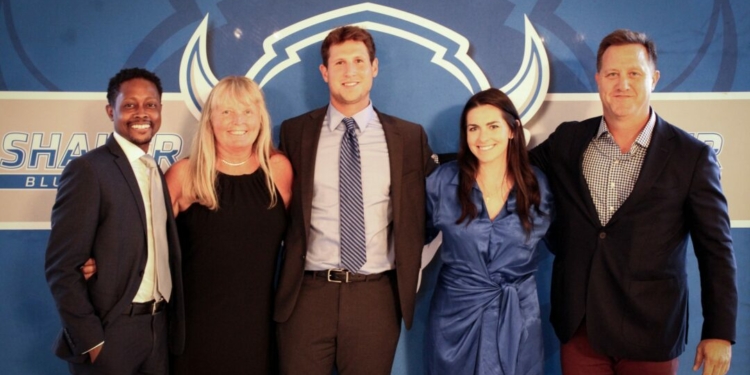 Six Shaker High School alumni were inducted into the Athletic Hall of Fame during a ceremony on Aug. 4 at Woferts Roost Country Club

The athletes were chosen by the Hall of Fame Committee and nominees were required to have participated with distinction in a Shaker sports program, have graduated at least five years ago and must demonstrated “good citizen and character.”

This year’s inductees are:

Cloud was a varsity athlete from 1970-1972, participating in football, basketball, and tennis. He was a Suburban Council and Section 2 singles champion in 1971 and 1972. Robert was the state champion in hard court and clay court in 1972, and received the Most Valuable Player award in 1972. After high school, he attended the U.S. Naval Academy.

Egan began his football career in seventh grade. He was so motivated at a young age that when he made the varsity football team in 2012. He was an integral part of winning the Section II championship that year, and every year after that he put his heart and soul into the sport. After graduating Shaker, he went on to RPI to play football, where he played all four years earning All-League and All-Region accolades.

Crummey played varsity tennis spanning from seventh to 12th grade. She was a Section II Champion 2009-2011, while also qualifying for the New York State Public High School Athletic Association Championships from 2007-2011. After graduation in 2012, she attended UAlbany for two years before transferring to Geneseo, where she was undefeated and holds records for singles wins in a season. Crummey graduated from Geneseo in 2016 and went on to Albany Law School in 2019.

Sweet was a member of the lacrosse team from 1985 -1987 and the football team from 1985-1986. He was a part of the teams that won a Sectional title in 1985 and 1987. He was a midfielder, using his speed to his advantage. After graduating Shaker in 1987, Greg went to attend Hudson Valley Community College where he was First Team Junior College All-American in 1989. He later attended St. John’s University where he was a starting midfielder.

Kippins was a part of indoor and outdoor track and field programs from seventh to 12th grade, as well as participating in cross country and soccer during his time at Shaker. He was an outstanding triple jumper, intermediate hurdler and mid-distance runner. He was a Section II champion, state qualifier and record holder in several events in his career at Shaker. After graduation, he attended Cornell University where he excelled in the track and field program.

Gansle coached for 42 years, with 126 consecutive seasons as the varsity head of cross country (a program she started,) gymnastics, and outdoor track and field. She continues to serve as state coordinator for two of these programs. Throughout her career, she had countless state qualifiers and was named Coach of the Year on several occasions. Aside from the accolades, Gransle made immeasurable contributions to the lives of many of her athletes and their families.