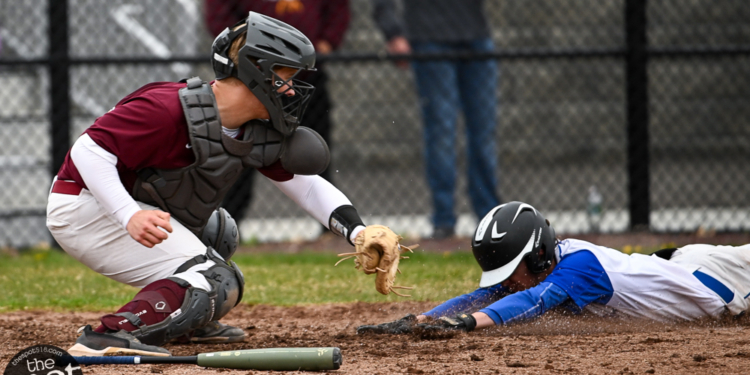 LATHAM — The baseball game at Shaker High on Friday, May 6, was set to be one of the best of the season — and it didn’t disappoint.

At the onset it featured two of the top pitchers in Section II throwing against their respective crosstown rival. Sam Falace for Colonie and Ryan Bates for Shaker didn’t disappoint on the mound with each going the distance and giving up a total of just three runs on nine hits.

In the end, thanks in part to a close call at the plate in the bottom of the fifth that killed a Shaker rally, Colonie outlasted the Bison for a 2-1 win for its 14th win of the season and to move to 9-1 in the competitive Suburban Council. Shaker stands at 7-3 in league play and still within the top three in the Suburban Council and is at 10-4 overall.

On Friday, Tyler Figueroa got Colonie on the board first with a run scoring double in the first inning and it remained 1-0 through five until Figueroa got his second run-scoring base hit to give the Garnet Raiders a 2-0 lead in in the sixth.

Figueroa went 2 for 3 with a double and two RBIs to lead Colonie while Daniel Barbero went 2 for 3 and Zach Ashline added a hit.

For Shaker, Sam Case went 2 for 2 while Tommy case and Bates added hits.

Colonie will host Averill Park on Monday May 9 and round out the regular season at Albany on Wednesday, May 11. It will also play a non-league game at Schalmont on Saturday, May 14.

Shaker will play at Guilderland today, Saturday, May 7, and play at Schenectady on Monday, May 9, before finishing up the Suburban Council regular season league play at CBA on Wednesday, May 11. It will host two non-league games against Kingston and Columbia on May 14 and May 16, respectively.

Defining hardscape and how to use it