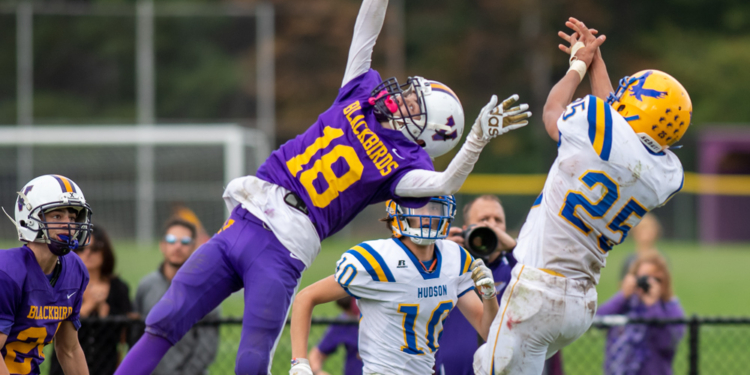 VOORHEESVILLE — The Blackbirds clipped the Bluehawks from Hudson, 22-14, on Saturday, Oct. 9, in a battle for first place in the Class C, South Division.

Voorheesville is 4-1 having won its last four games while Hudson dropped to 4-1, coming into the game undefeated on the year.

Voorheesville got on the board first with a 13-yard run by Ryan Conley to take a 7-0 lead after the first quarter. Conley scored again in the second on a four-yard run to give the Blackbirds a 13-0 lead at the half.

Hudson, though, was not out of it and Isaiah Maines scored from the one-yard line to bring the score to 13-6. Mains scored again with 3:43 left in the third to bring Hudson within a point, 13-12. The Blackhawks opted to go for two and after a penalty they were pushed back to beyond the 20-yard line. After a huge scramble, Maines hit Brian Curran for the conversion and a 14-13 lead.

After a poor kick, Voorheesville marched the ball down field but was denied at the goal line by Hudson and the Bluehawks took over on downs. The first play from scrimmage, though, Voorheesville tackled the Hudson running back in the end zone for a safety and a 15-14 lead.

Voorheesville scored again in the fourth for the final of 22-14.

Click on a photo below to view a slideshow of the rest or if you are on a news app click here.