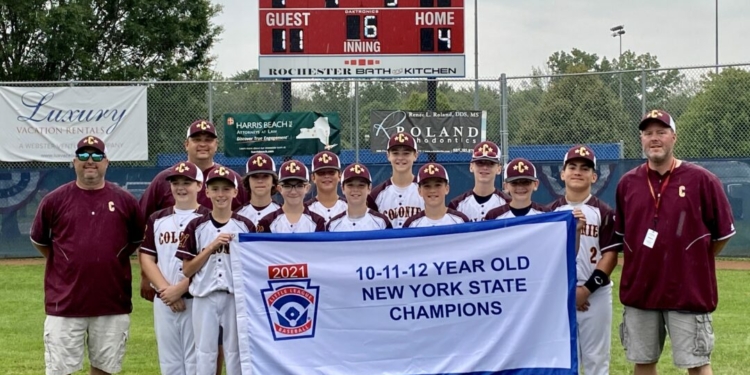 PENFIELD — The Colonie 12U Little League team rolled through the state championship tournament last week and will now play in the Mid-Atlantic Regionals in Bristol, Connecticut.

Thanks to a favorable draw, and the fact there are no international teams playing because of COVID-19, the Raiders are just two wins from making a trip to the storied Little League World Series in Williamsport, Pennsylvania.

“The boys are playing well right now. We are hitting the ball and our pitching has been phenomenal but our motto is ‘one game at a time’ and that’s how we are taking things,” said manager Rich Hillicoss.

The New York state champion drew a buy in Sunday’s first round of play and the Raiders will play the winner of Pennsylvania and Washington DC on Monday, Aug. 9. If the Raiders win that game, they will play in the semifinals on Aug. 12. A win in the semis would put them in the finals and earn them a trip to Williamsport. The top two teams from each regional competition will make the trip to make up for the lack of international teams.

A loss in either game won’t preclude the Raiders a trip, but playing out of the losers bracket is much more difficult and requires at least two additional wins.

In the regionals, played in Penfield, a suburb of Rochester, the Raiders went 5-0 over the course of a week beating: Rotterdam-Carman 7-3, East Meadow 14-2, Rye 15-0, Vestal 8-3 and Rotterdam Carman again in the championship 11-4 on Sunday, Aug. 1.

The Mid-Atlantic Regionals start on Sunday, Aug. 8 with the championship set to be played on Saturday, Aug. 14. Because of COVID, the games are not open to the public but each team will get 250 tickets to hand out to family and friends.

Since the post season began on June 22 with a local round robin tournament the Raiders 12U team is 16-0, and has outscored its opponents 181 to 30. While the competition certainly will get more intense as the team progresses through the different levels, a post season record that strong is cause for any potential opponent to take notice.

“As a coach, it’s amazing to watch the kids perform and succeed at the next level,” said coach Chris Dannehy, whose son pitches, plays first base and other positions. “As a parent, the stress can be off the charts, but we are enjoying every minute of it.”

Hillicoss said the better teams are traditionally from New Jersey, Pennsylvania and New York but he has been watching game changer stats and checking out Facebook page discussions focusing on the tournament to get a feel of the competition.

“I have been looking here and there but we are just really excited to get down there,” he said. “We are getting a tremendous amount of support from the community and it’s just been a blast.”

A Colonie team did make it to Bristol in 2014 by coming out of the losers bracket, and prior to that a Colonie team won the states in 2004. Both trips ended with a loss in the semifinals, two wins from a ticket to Williamsport.

But the stars are more aligned this year, and if any good ever came out of COVID-19 it could be that the pandemic helped a team from Colonie get to the Little League World Series.

“We are literally two games away from playing in Williamsport right now,” Hillicoss said, adding that the only time he might have been on ESPN was as a spectator in 2017 when he brought some kids down Williamsport to watch the championship game featuring Japan.

During the championship game against Rotterdam, which is just on the other side of the Section II dividing line, the Raiders found themselves in an unfamiliar spot, down by a run after an inning.

Carter Epting, Tyler Bilka and Steven Thomas all had multiple hits for the Raiders.

On the mound, Fruscio went four innings giving up a hit while walking five and striking out seven. Drew Hillicoss gave up four hits and four runs in one inning of work while Bilka pitched an inning and struck out two.

Check out our website for more photos of the state semifinals against Vestal and the championship game against Rotterdam.

All photos courtesy of Brent Warzocha.

Inmate escapes from Albany County jail but doesn’t get far