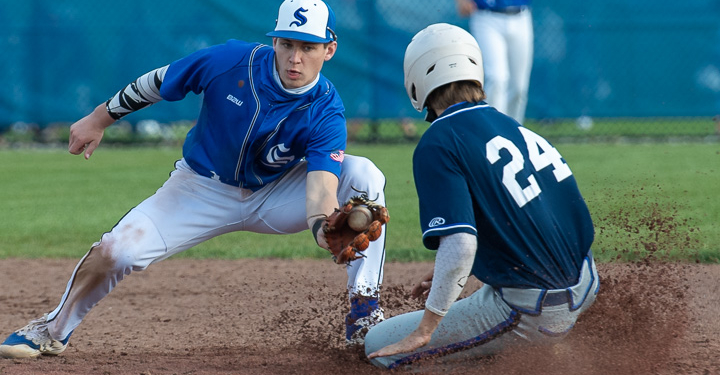 Saratoga baserunner Sean Hudson slides into second under the tag of Shaker shortstop Joe Karpierz during a Suburban Council matchup against Saratoga at Shaker High School in Latham, NY, on Friday, May 14, 2021. (Jim Franco/Special to the Times Union)

Patrick Deschaine, the Saratoga first baseman and No. 4 batter, hit two homeruns and drove in four runs in the win for Saratoga.

Robert Frantages went 2 for 4 with two RBIs to lead Shaker at the plate while Josh Foglia went 1 for 3 and an RBI and Justin Smith went 1 for 2.

Nathan Rodriguez went five innings for Saratoga to pick up the win, giving up three runs on four hits while walking four and striking out four.

Shaker will host Ballston Spa today and play at Nisky on Monday, May 17.