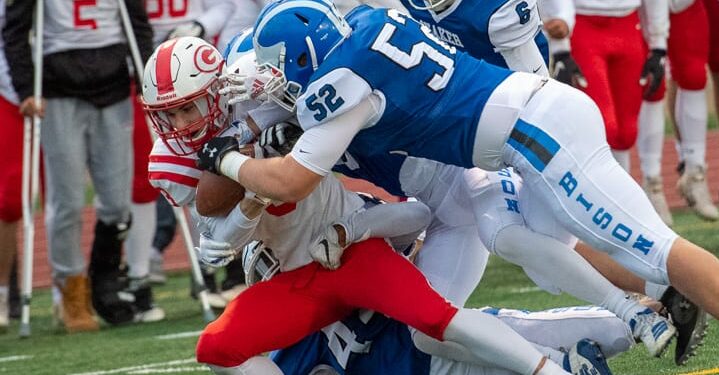 LATHAM — With about a minute and a half left in the game, the Guilderland Dutchmen had a chance to kick an extra point to tie Shaker at 20 and send the Class AA championship into overtime.

Instead, after Shaker was called offside moving the ball to the two-yard line, Guilderland coach Dan Penna opted to go for a two-point conversion and the title.

Quarterback Logan Broomhall got the call and followed his line across the line for a 21-20 lead which held up, giving Guilderland its first ever Class AA title.

“I was just going to keep moving my legs until someone killed me,” Broomhall told reporters after the game on Friday, April 30. “It feels amazing, we just wrote Guilderland football history. We knew they were going to be a hard team to beat. They have been dominating, so to win it, with this group of guys, just feels unbelievable.”

Bloomhall scored two touchdowns and threw for another — the pass to Marcus McClaine  to bring Guilderland within a point. That pass was tipped at the line of scrimmage and McClaine scampered 12 yards before diving into the end zone for the score.

After Shaker fullback Dean Hartl’s two touchdowns gave Shaker a 20-13 lead, the Bison opted to go for two and make it a two possession game, but the fake extra point was not successful.

Shaker had the ball with just under a minute and a half and drove the ball to the Guilderland 40 but a Hail Mary by quarterback Joey Mirable was picked off to end the game.

“This team really believed in themselves,” Penna told reporters after the game. “We knew we were playing a great football team, revenge really isn’t a factor in a game like this. It’s about playing hard and playing well. I’m just so proud of how these kids stepped up in key situations today.”

Shaker bested Guilderland the first time the two teams met, in week two, 35-25. The loss in the championship is the Bison’s first of the season after the team has dominated every other opponent — outscoring them by a total of 226-46 up to the final game on Friday.

The football season was cancelled last fall because of COVID-19 and “high risk” sports were moved to this spring during Fall II. The season was just five game long and then two weeks of playoffs. There is no regional or state competition.

Photos by Jim Franco and Sarah Hamilton, a Shaker high senior. Click on one below to view a slideshow of the rest.