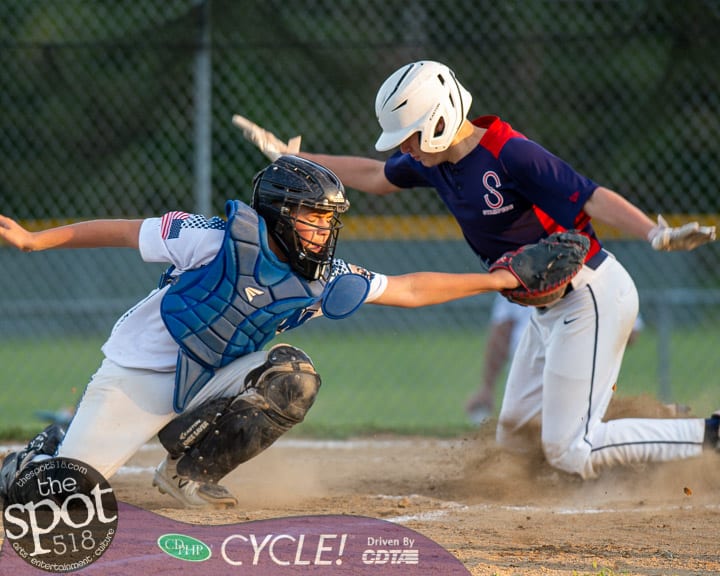 COLONIE — The North Colonie Bison 14U played a double header on Friday, Sept. 11, against the Saratoga Stampede, dropping the first game 8-2 but coming back to win the second game 5-3.

In the first game, the Bison gave up seven runs in the top of the second inning and could not recover in spite of outhitting the Stampede 8 to 5.

In game two, the Bison were down 3 to 1 after four innings but came back with two runs in the fifth and two more in the sixth for the win.

In game two, Nate Lajeunesse went 1 for 2 with two RBIs and Connor Roberts went 2 for 3 to lead the Bison on offense. Alex Polsinello went 1 for 2 with an RBI while Davis Pierson, Andrew Schlosstein and Case LaChance all added hits.

DJ Cioffi got the win. He combined with Davis, Roberts and Polsinello to give up the three runs on just two hits while striking out six and walking 13.

Hunter Fales took the loss for Saratoga. He combined with Ronan Rowe to give up the five runs on seven hits while striking out four and walking eight.

In the first game, Davis went 3 for 3 with a run scored and Roberts went 2 for 3 to lead the Bison on offense. Brian Warncke, Lajeunesse and Cioffi all added hits.

Schlosstein, Warncke and Isaiah Mackey split the duties on the mound giving up the eight runs on five hits while striking out three and walking 14.

Thomas McNamara got the win for Saratoga and he and Joe Skiff combined to give up the two runs on eight hits while striking out seven and walking three.