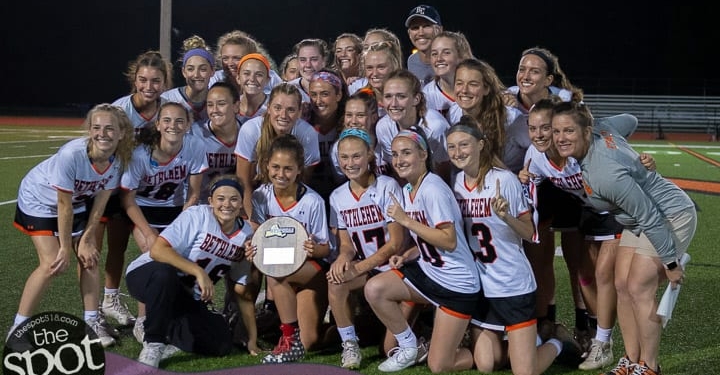 ROTTERDAM — The Eagles dominated the state quarterfinals on Friday, May 31 by beating North Rockland, of Section I, 15-9 in a game that wasn’t even that close.

Bethlehem, with self-made, inspirational tattoos like “Roll Tide” and “Work Hard” and “2 seed” written on their thighs and arms, dominated both ends of the field and never let North Rockland get into any kind of groove.

Six different players scored for Bethlehem with Caroline Wise and Lauren Riker scoring four each, the latter getting a behind the head goal while cutting in front of the net in what is becoming her signature shot.

Senior Sophia Koch was again stellar in net for Bethlehem with a dozen saves including three consecutive saves early in the game to knock North Rockland off the pace they wanted to set, and two back-to-back late in the game when the Long Island team was forced to try and score in a hurry.

Bethlehem came into the game after two tough Section II games, the first a re-match of the season finale against Saratoga which Bethlehem won 12-11, and the second a hard-fought 15-12 win against rival Shenendehowa.

Despite having the best record in Section II, the team was the No. 2 seed and had a much more difficult road getting into the state tournament.

All Section II teams had a bye in the subregional round of state play, and Bethlehem will travel to SUNY Cortland on Friday, June 7 to take on the winner of Section III Baker and Section IV Ithaca in the semifinals.