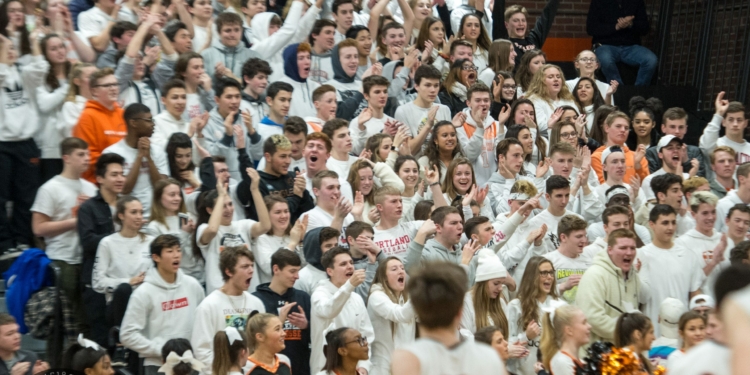 Special to The Spotlight

BETHLEHEM — The Eagles are still undefeated … the Blue Streaks are not.

In front of a large, boisterous crowd on Tuesday, Jan. 15, Bethlehem continues their undefeated season with a Suburban Council win over Saratoga, 75-65.

Bethlehem’s Patrick Ryan started the game hot, connecting on three straight three pointers in the first few minutes of the game. Saratoga fought back as the teams traded buckets, and they ended the first quarter trailing Bethlehem by one after Justin Barnes hit a last second three for The Eagles.

The Eagles started slowly and struggled to get things going at the offensive end. They were scoreless for the first 3:13 of the second quarter.

Junior Eric Signore broke the cold stretch for the Eagles connecting on a jumper from the foul line, and on the next possession scored with a crafty spin move he finished with his left hand.

Jake Laclair trailed Signor’s four points with a quick four of his own, and Xavier Wakefield connected on a deep two to finish up the Eagles quick, 10-2 run.

After a time out by Saratoga’s coach Matt Usher, the Blue Streaks looked and played much better and went on to tie the game at 34, with just eight seconds remaining in the half.

Michael Ortale moved up the court with time winding down and found Laclair open in the left corner to connect on a buzzer beater to put the Eagles up 37-34 at halftime.

Coming off the break still on fire, Ryan knocked down consecutive threes followed by a three from Ortale. The Eagles continued on a hot streak for the rest of the third quarter, outscoring the Blue Streaks 25-16, and taking a 12-point lead heading into the fourth.

Saratoga continued to fight, though, and were within three with four minutes remaining when Signore grabbed an offensive rebound and put it up for a bucket and the foul, to give Bethlehem a 67-61 advantage.

Junior Will Davis put the game out of reach after converting a one and one with 2:20 left in the game.

“My teammates did a great job finding me last night,” said Ryan, who finished the game 6-8 from behind the arch, “it felt really good finally being able to hit some shots. I’ve been patient and last night it finally started to fall, it felt really good.”

Bethlehem did a great job sharing the ball as 7 of the 14 players contributed in scoring. Laclair had 15, Signor had 12, and Ortale chipped in 11. Davis had seven points while Wakefield and Barnes each had five to round out the scoring for Bethlehem (9-0, 13-0.)

Click on a photo below to view a slideshow of the rest. (Photos by Jim Franco)