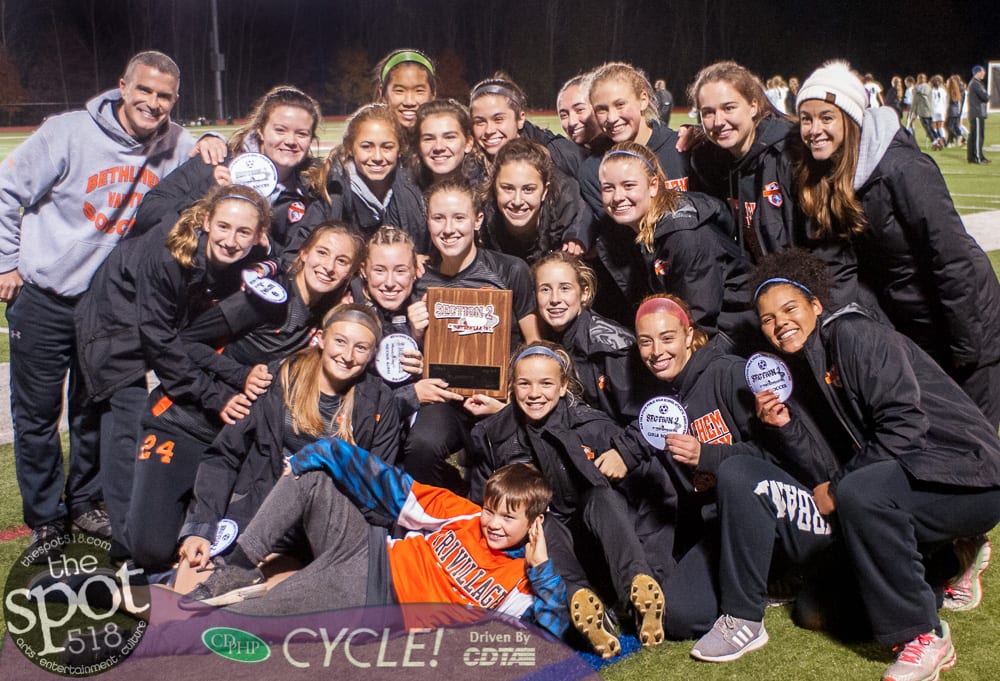 The scrappy, talented, tight-knit squad beat the No. 2 seed team from Shen 2-1 in a thriller at Stillwater High School on Monday, Oct. 29.

“They are one of the hardest working teams we ever had. There is a large talent depth and we can move people around in different positions, but their work rate every day in practice is tremendous,” said coach Tom Rogan. “It’s always sweet. Sectionals are always difficult to win. We talked on the bus and we thought we proved we were the best team all season, and we had to prove it again tonight.”

Piper Gregory got the game winner with 3:25 left on a feed from Clair Hutton, the seventh grader’s second assist of the game. Gregory put a move on a Shen defender and then fired it into the corner of the net.

“There is always some anxiety to hit it right away, but we try to keep our composure and set up and hit the shot,” Gregory said. “The defense started it off and we worked it through the midfield and I am just happy we were able to get it to the front and all I had to do was tip it off.”

The Eagles scored first when Captain Grace Hotaling fired home a goal on a Hutton assist just seven minutes into the game.

It stayed 1-0 until 12:03 left in the game, when Shen tied it up on a goal by Bella Guarracino, that appeared to deflect off a Bethlehem defender.

“It was a little bit of a shock,” Hotaling said of the game-tying goal. “As the clock kept ticking, Shen was playing great the entire game, but you have to get your team back together again and keep going and hopefully pull out a W.”

After Gregory’s goal, and Bethlehem’s outstanding defense playing outstanding again on Monday, the game was all but out of reach. But, with 1:58 remaining, Shen did find the back of the net on a corner kick lofted in front of the net into a scrum of players. That goal, though, was denied by the officials who appeared to call Shen for pushing in the box.