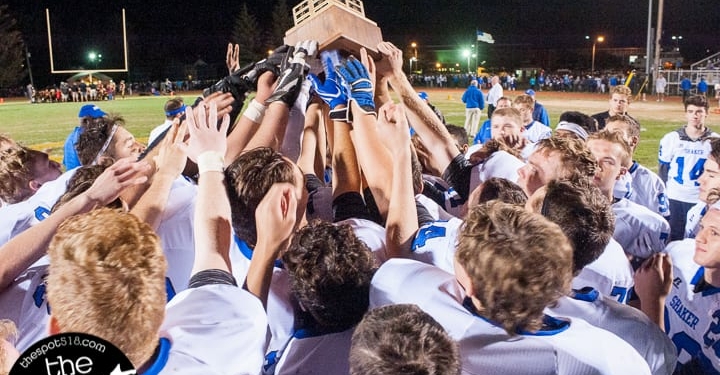 COLONIE – Shaker travelled across town on Thursday, Sept. 28, and dominated the first half of play – and the first play of the second half – to keep the Colonie Cup by a score of 40-30.

Tailback Jack Bush scored twice in the first quarter for Shaker on runs of 18 and 44 yards, respectively.

Ravion Burt scored twice in the second for Shaker on runs of two and 34 yards and the game appeared to be headed for a blowout.

That was reinforced when Bush returned a kickoff 56 yards to start the second half.

But, Colonie wasn’t done, and Bryan Grimes caught quick slant from Ed Soto and dashed 62-yards for a score and then Michael Barber scored on an eight-yard scamper.

Joe Toutai responded with a one-yard touchdown for Shaker.

Next week, on Friday, Oct. 6, Colonie will host LaSalle and Shaker will host Troy.