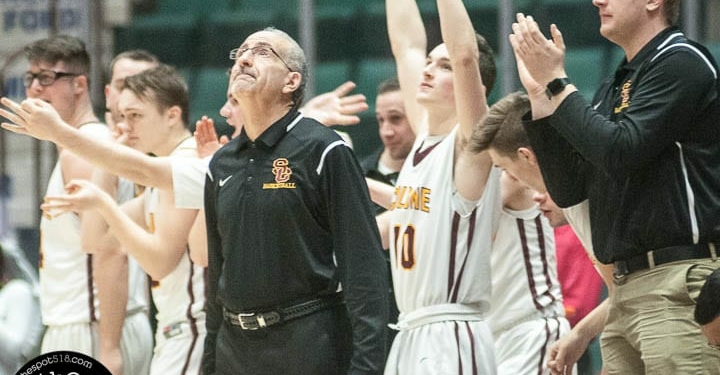 GLENS FALLS – The No. 1 seed Colonie Raiders led Schenectady the entire way and will now square off against the No. 3 seed Eagles from Bethlehem for the Section II, Class AA championship.

Colonie led by two points after a quarter on Tuesday Feb. 28, and then outscored Schenectady, the No. 5 seed, 20-12 in the second to take a 35-25 lead into the locker room. The athletic Schenectady team was able to cut the lead to five midway through the fourth quarter but never came closer and the final was 72-61.

The big men were dominant or Colonie. Bryce Waterman led the Raiders with 22 points and seven rebounds while his counterpart Isaiah Moll had 21 points, eight rebounds and four assists. Brendan Mulson chipped in 11 points and four rebounds for Colonie.

Scrappy point guard Will Aybar had nine points, four assists and four steals for Colonie and Jaeden Lewis had nine points. The squads only four-season starter, Josh Paszkowski had a point.

Colonie will square off against Bethlehem Saturday, March 4 at 7:30 p.m. at the Glens Falls Civic Center.

The two teams split during the regular season with each winning by a three-point margin on their respective home courts.