CDHSHL report: The race for playoff positioning heats up 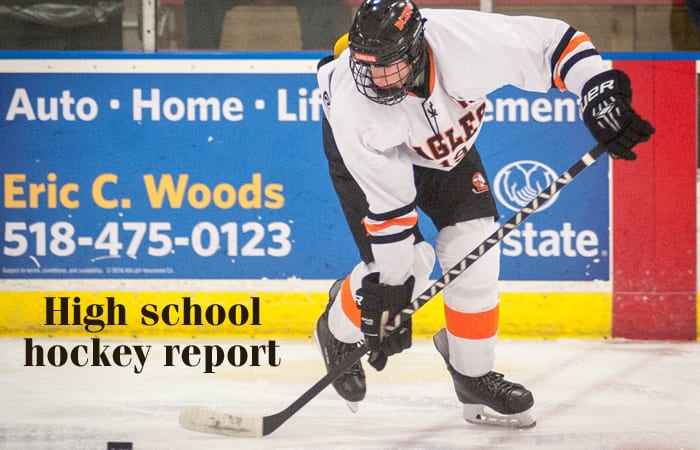 Before we take a look ahead at the final week of the Capital District High School Hockey League regular season and the Section 2 Division 1 playoff picture, let’s take a look back at last weekend’s action.

Friday, Feb. 3
Bethlehem 4, Saratoga 1
There was no letdown for Bethlehem after beating LaSalle three nights earlier. The Eagles got goals from four different players, and goaltender Alex Breiner stopped 30 of the 31 shots he faced to help Bethlehem win at Weibel Avenue Rink.

Guilderland/Mohonasen/Scotia/Voorheesville/Schalmont 4, Taconic (Mass.) 1
The Storm struck for three goals in the second period to take control. Anthony Sericolo led the way with two goals and an assist.

Saturday, Feb. 4
LaSalle 6, Christian Brothers Academy 2
LaSalle held onto sole possession of first place by winning its rivalry game with CBA. Taylor Nitz and Tom Ryan each scored a pair of goals for the Cadets, and Logan DiScanio added a goal and three assists.

Bethlehem 7, Tri-Falls 3
Bethlehem’s second long bus trip in less than 24 hours didn’t drain the Eagles of their energy, as they jumped out to a 5-0 lead in the first period. Thomas Liebold had a two-goal afternoon for Bethlehem.

LaSalle, Shen and Bethlehem each have a maximum of two standings points to gain this week. LaSalle faces the two Division 2 teams – Tri-Falls Wednesday and Queensbury Friday. Bethlehem takes on Niskayuna/Schenectady Wednesday and Shaker/Colonie Friday, while Shen hosts CBA Wednesday.

Bethlehem has the best chance to gain both of its available standings points against two of the lower-level CDHSHL teams, but the Eagles would need LaSalle to lose at least one of its two games and Shen to lose to CBA to grab the No. 1 seed. Far more likely, LaSalle also wins its last two games to hold onto the top seed, Shen knocks off CBA to keep the No. 2 seed and Bethlehem stays hot to take the No. 3 seed.

CBA and Shaker/Colonie also have three available standings points to improve their Sectional seeds, but facing some of the top CDHSHL teams makes that task difficult. At least, Shaker/Colonie has a two-point league game against Queensbury Saturday to look forward to, but the way the Spartans have been playing lately, it’s not a sure thing the Jets can pull off a victory.

GMSVS is the only other team that improve its Sectional seed this weekend, but it would involve a win over Queensbury Wednesday and Niskayuna/Schenectady continuing its slide. Even if that happens, all that it would do is give the Storm a home game in the 8/9 match-up against Niskayuna/Schenectady. Not much of an improvement in one sense, but for a program that hasn’t had much success in recent years, it would mean a lot for the Storm to have a home playoff game.

It’ll be an interesting final week of the regular season.