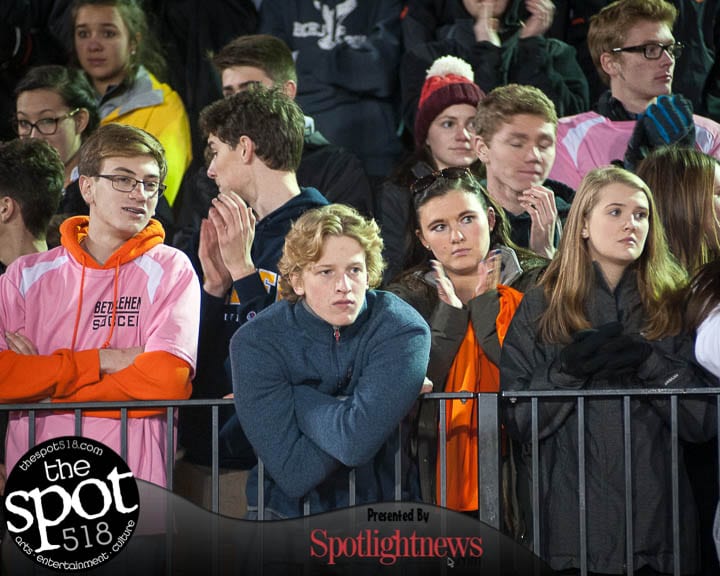 The Eagles played the Red Raiders Fairport High School, the No. 2 ranked team in the state from Section V, even for the first eighty minutes of regulation and two 15-minute sudden death overtimes. Each side had their opportunities but neither scored in regulation.

Bethlehem keeper Ryan Henning had a number of terrific saves in the game, and the Eagles had two scoring opportunities late in the second overtime that never found the net.

It came down to penalty kicks with five players from each team taking a crack at the opposing keeper.

Fairport scored first, and keeper Jake Hortz blocked the first attempt by Bethlehem. The Raiders second player failed to convert while the rest for each team did.

It was 4-3 with Bethlehem captain and standout Kevin Piccolino the final shooter. He was aiming for the left, upper corner but the ball sailed on him and went high of the net.

“It’s tougher,” said Bethlehem Coach Phil Ridgway of losing on penalty kicks. “You always want to have the game end while you’re playing but penalties are tough. It’s a hard way to end a game.

“Usually Kevin is money in the bank for us. He’s been that way all year but he was bound to miss one of them and tonight was the one. He has been our PK taker all year and this is the first one he missed.”

The game was played on turf, and while Ridgway said it may have impacted PKs because the ball tends to get more air than when kicking on grass, he didn’t believe it didn’t impact the game – a match he called “fantastic.”

“We had our chances but we just couldn’t capitalize on them. We couldn’t find the back of the net,” he said after the game. “We pushed hard but they are a good team. They are a very technical team. A solid team defensively and solid skill-wise. It was a very even match, I thought.”

Bethlehem finishes the season ranked third in the state and with an 18-3 record. Technically, they split the Section II, Class AA crown with Shenendehowa, but beat the Plainsmen in the finals to move onto state play.

That game ended in penalty kicks also and the same five players – Piccolino, Patrick Haynes, Nate Weinstock, David Bell and Derin Gumustop – score one more than Shen thanks to a Henning save. Piccolino hit the clincher.

The Eagles beat Liverpool, from Section III, to win the regional championship and move on to the state Final Four.

“We played great all year. And this team never gives up. They are solid technically and defensively,” Ridgway said of his squad. “It’s tough, but we have to hold our chins up and focus on the good things because we had a lot of them.”

Fairport will play New Rochelle from Section I, Sunday afternoon for the state championship.

Photos by Jim Franco. Click on one to view the rest of the gallery in full size.