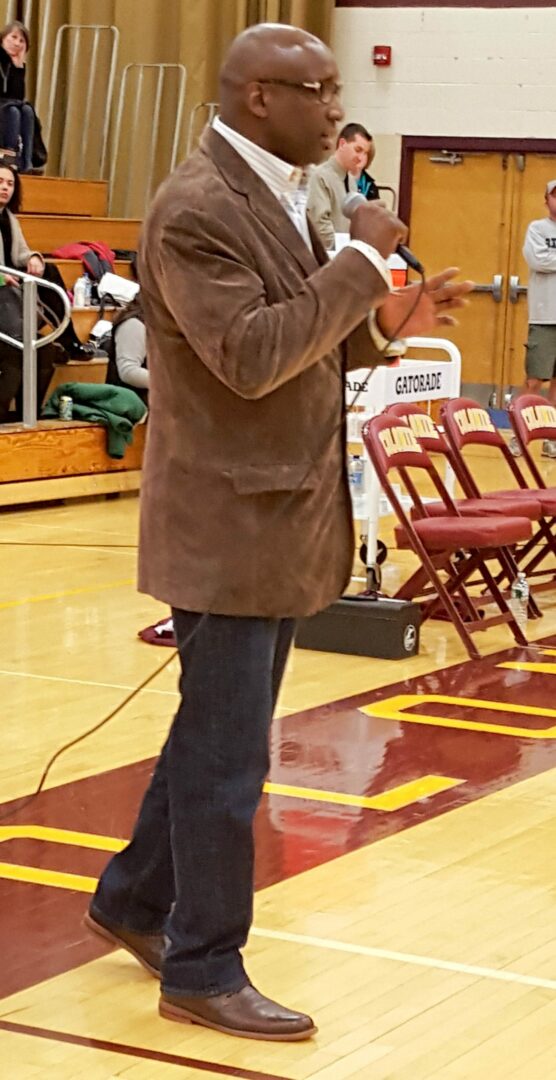 The former football and basketball standout was in town to help celebrate the 50th anniversary of the National Football League’s Super Bowl — something he got to experience as a member of the 1998 Denver Broncos.

“It was unforgettable,” said Gamble, who spent his one season with the Broncos as a reserve receiver. “Making the team was one thing, and I was able to live my dream just by playing. And then, having the Super Bowl run and winning it all, it instilled confidence. If you just work hard and you believe in yourself and you surround yourself with great people, anything can happen.”

Though he never caught a pass in a regular season NFL game, Gamble had the opportunity to practice with John Elway — one of the top quarterbacks in league history. When asked about catching an Elway pass, Gamble held out his hands to show how bent his fingers were.

“I would tell people that I have some trophies and some scars that show me what it’s like catching balls from a hall of famer — arguably one of the best to ever play the game,” said Gamble. “It’s always something I take away — not only the passes that he’s thrown to me, but (also) his leadership, trying to talk to a young receiver into trying to be in the right place at the right time. It was awesome.”

Several current and former Colonie Central High School varsity coaches were on hand to see Gamble’s speech, including past coach Mike Ambrosio, who coached Gamble in the early 1990s.

“You always hope that dream (of playing professional sports) comes true,” said Ambrosio. “David dedicated himself to working hard, and it paid off.”

Gamble recalled being part of the first Colonie boys basketball team to call the main gymnasium its home more than 20 years ago.

“You know what’s ironic is I played the first game ever in this (gym) here,” said Gamble. “I got the same chills that if I was warming up with an NFL team right now. It bring back that many memories, knowing that this is my foundation and my home.”

“I think it’s good for our kids just to see and hear someone who came from here speak,” said Guardino. “It just speaks volumes about him. He says he still considers this his home.”

Gamble watched this year’s Super Bowl from his current home in Florida, where he saw his former team, the Broncos, defeat the Carolina Panthers 24-10.

“I had a big Super Bowl party at my house,” said Gamble. “I was one of very few Denver fans.”

And for any current Colonie athlete who has dreams of making a professional team roster, Gamble offered this advice.

“It’s really all about believing in yourself,” said Gamble. “This program here (at Colonie) is a bunch of blue collar workers, and if you believe in yourself, good things can happen.”