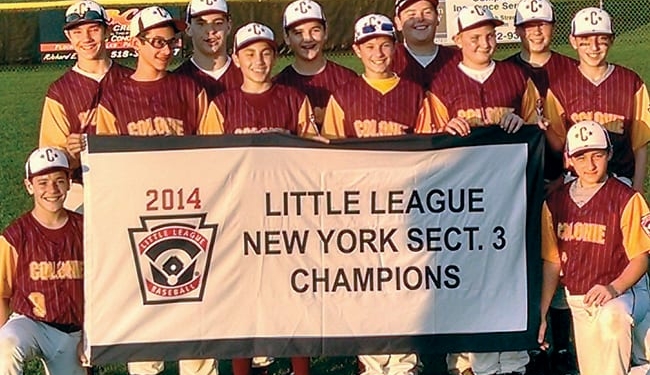 Something clicked with the Colonie Little League’s 12-year-old all-stars, and it carried them to the state championship.

After getting past East Meadow 7-6 in its second elimination game, Colonie cranked up its offense in wins over Throggs Neck and Wappingers Falls to win the New York state tournament last weekend in Cicero. Colonie knocked off Throggs Neck 24-2 Friday, July 25, to reach the finals, where it beat Wappingers Falls by scores of 15-1 Saturday, July 26, and 15-0 Sunday, July 27.

“I don’t know if it’s actually sunk in yet,” said Colonie coach Dan Lofrumento. “But it was a challenge for us, and we’re glad to go on to the next level.”

The next level is the Mid-Atlantic Regional, which begins Friday, Aug. 1, in Bristol, Conn. Colonie starts pool play against the Washington, D.C., champion and continues with games against representatives from New Jersey, Maryland and Pennsylvania.

Colonie faced elimination off the bat following a 10-7 loss to Wappingers Falls in its first game Monday, July 21. Colonie edged Grand Island and East Meadow in its next two games – each by one run – to stay alive.

“We just kept them focused (following the opening loss) and let them know what the next challenge was going to be, and they did it,” said Lofrumento.

Collin McDonough made certain Colonie wouldn’t need to sweat out a victory over Throggs Neck in its third elimination game. McDonough hit a three-run homer and a grand slam in the same inning to fuel Colonie’s 24-2 win.

“We played some good defense, we got some great pitching and we started hitting the ball,” said Lofrumento.

“Timing is everything,” said Lofrumento. “And it was in a championship game and everything.”

“We weren’t expecting it, but we knew the potential was there. The potential was always there,” said Lofrumento. “It’s all the kids, now. They’ve worked hard to get here.”

Colonie’s 11-year-old division all-stars also reached the finals of its level’s state tournament outside Rochester. Colonie defeated Massapequa 18-15, edged Geddes 8-7 and beat Haverstraw 16-11 to get within a victory of the championship. However, Massapequa defeated Colonie 14-1 Sunday, July 27, to force a second game Monday, July 28.