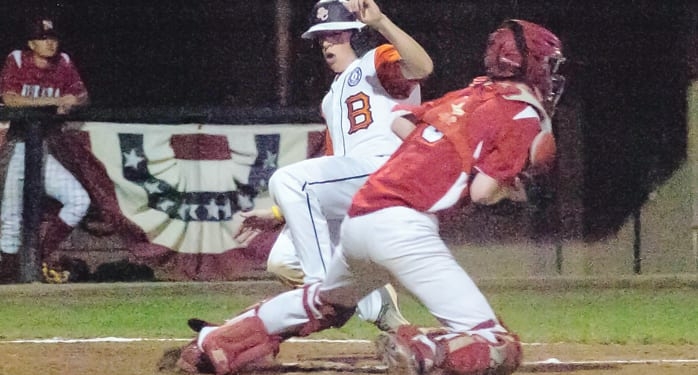 “He battles hard,” said Bethlehem manager – and Trevor’s father – Scott Kniffin. “He lives to do this. He’s been doing this since he was 7 years old, and he loves to battle.”

“As you saw here today, offense wins games, as does defense. And we did both,” said Trevor.

Bethlehem’s hitters gave Trevor all the run support he needed in the bottom of the third inning. Cooper Martell’s two-run single opened the floodgates on a 10-run inning – during which Bethlehem benefited from two Niskayuna errors, a bases-loaded walk and a bases-loaded hit batsman. Dylan Rodriguez and Ned Englebride also drove in a pair of runs.

“That’s been kind of our whole season in a nutshell,” said Scott Kniffin. “They made a couple of errors, and we took advantage of them.”

Trevor then battled through a pair of Bethlehem errors in the top of the fifth inning to finish off his first no-hitter since playing Little League ball at the age of 12. It was only the second inning he allowed a Niskayuna runner to reach base.

“I struggled a little bit, and I started to overpitch,” said Trevor. “I needed to calm down and trust my fielders.”

The outcome of Thursday’s game had no bearing on Bethlehem’s future. That was sealed when Niskayuna reached the championship game with a one-run victory over Kingston in the semifinals Tuesday, July 22. With Niskayuna and Eastern New York hosting this year’s Mid-Atlantic Regional, Bethlehem was assured of a berth regardless of whether it beat Niskayuna because it earned one of two bids from the state by also making the final. The other state bid went to Rotterdam, which beat Kingston for third place.

“That’s above our goal (this season), and now we have another step to take,” said Scott Kniffin.

Bethlehem begins playing in the Mid-Atlantic Regional Friday, Aug. 1, at Niskayuna’s Blatnick Park. It will be the first time this postseason that Bethlehem will travel outside of Albany County to compete in a Babe Ruth tournament. Bethlehem hosted the sectional round and only needed to make a short trip to Guilderland to compete in states.

“I don’t mind (not traveling far) because of home field advantage,” said Trevor Kniffin. “We’re going to have our family and friends there cheering us on.”