Burn off that bird 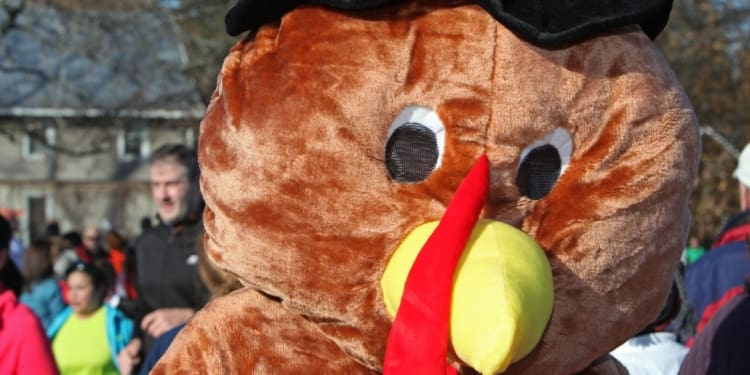 With Thanksgiving a few days away, some people are looking for ways to keep themselves off the couch and the calories at bay.

For those not busy prepping the bird, many organizations in the area have begun offering a new holiday tradition: exercise. These days, an increasing number of families are opting to take part in annual Turkey Trot races over sitting home and watching the parade.

The largest Turkey Trot in the region remains the event held each year in Troy, but for the past four years a smaller race has been held in Bethlehem.

“At first, we thought we were going to be taking people away from Troy, but actually their numbers are bigger than ever,” said John Guastella of Our Towne Bethlehem, who organizes the event each year. “I think more people want to get physically fit.”

The race is held to benefit the Bethlehem Food Pantry. Additional money raised through registration fees also goes toward the Bethlehem Community Fund and the Parker Mathusa Community Service Scholarship Fund at the High School. Thousands of dollars have been raised for those three organizations over the past four years.

“People care where the money is going because it stays in town,” said Guastella. “Take care of where you live first, and then branch out.”

The event is a 5-kilometer run or walk and starts at 9 a.m. on Thursday, Nov. 28. Registration costs $20, and awards are given for the top male and female overall runners and best costumes. About 2,000 people participate in the race each year.

Guastella said so many people were signing-up for the race the night before the event, last year they decided to do a fireworks display with the help from the town and school district. The fireworks will happen once again on Wednesday, Nov. 27, at 7 p.m. sponsored by ShopRite Supermarkets.

“It’s just another great event for the community that I think has become a Bethlehem tradition,” said Guastella.

There are other ways to put some pep in your step this Thanksgiving.

This will be the second year Judy Lasher will be holding a 90-minute Zumba session in Slingerlands on Thanksgiving morning. Lasher said she decided to hold the morning class after hearing from people who were looking to shed calories before the big feast but weren’t big on running.

“People want to eat a big meal, and now they can work out and not feel guilty,” she said.

Typical Zumba sessions last one hour. Lasher said she increased the time because of the large portion people typically eat on Thanksgiving.

“It’s a holiday surrounded by eating food,” she said.

The workout can help the average person burn about 750 calories, depending on a person’s size and their fitness level.

“People are intimated, but once they come, they realize this is something they can do,” she said

For those too busy to work out on Thanksgiving day, the sixth annual “Run off that Turkey-Trot 5K” takes place two days later at Altamont Elementary School.

The race will kick off at 10 a.m. on Saturday, Nov. 30. The course is U.S. Track and Field certified and will be timed. To pre-register for the race, visit www.active.com.

“It got started because the Saturday after Thanksgiving nothing is going on,” race organizer Phil Carducci said. “I have been doing a lot of races over the years, and this has been one of my favorites.”

Carducci said the course is fairly flat, with no major hills, but heading toward the finish line there is an incline up Main Street in the village. The race usually attracts around 300, which is somewhat dependant on the weather that morning. He said this year’s race is on track to have around 350 people running or walking.

“People decide the last second and look at the weather to see if they are going to come or not,” Carducci said. “I am hoping this year it is nice again and more people come out. The more, the merrier.”

Pre-registration for the race is $17 for a runner and anyone at least 70 years old can register for $13, which ends the night before the race. There will be race day registration of $20 for any participant. Anyone who pre-registers though will receive running gloves.

There were be awards given across five-year age groups, he said, with door gifts and prizes raffled off. This year there will also be live music.

“The youngest one we got so far this year is 8 years old and the oldest is 81,” he said. “I like seeing all the people that don’t usually run come out … and sometimes they get hooked on running.”