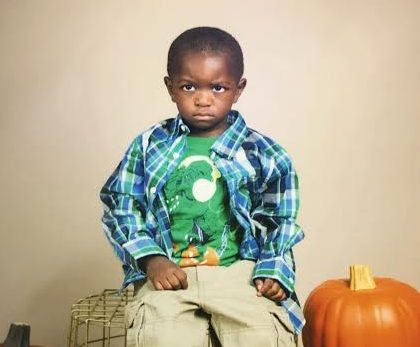 Helen Mitchell, 52, knows a thing or two about love. She has been raising her 7-year-old grandson, Elijah, since he was a baby. He has special needs, including speech and attention deficit.  In addition, she is pursuing the possibility of bipolar disorder, as his mom is bipolar.

His mother, her daughter, was only 13 when she had Elijah and ran away in the middle of the night, leaving her mother to care for her infant son. It took the police two weeks to find her. At this time, she and the baby were placed in a program called CMS, where she was to learn how to care for her son. After a week, she again ran away again. Ultimately, Helen gained full custody.

In the years that followed, Helen became both mother and grandmother to Elijah. His mother appeared sporadically in his life, just enough to make it unstable. Helen, who spent much of her adult life working as a certified nursing assistant, recently went to school to get her licensed practical nursing certification to better provide for Elijah.

In November 2016, Helen’s daughter, who now lives in South Carolina, gave birth to a baby girl. Her daughter had no prenatal care, and the baby, Gracie Marie, tested positive for marijuana at birth. Once again, the young mother was unable to care for her. The responsibility fell to Helen “in loco parentis” to give up the life she built in Albany and move to South Carolina. Until she could make the move, her 84-year-old father and 86-year-old mother cared for the baby.

When parents are absent or unable to take care of their children, grandparents often step in and fill the parenting void. Grandparents, particularly grandmothers, in the African- American community, have historically provided care for their grandchildren. They represent wisdom, strength, conveyer of African-American culture and keeper of the family values. These women have been known throughout time as the “Guardians of Generations.”

Over the past 40 years, the number of families headed by grandparents, within all cultures, has steadily increased. According to the U.S. census, African-American children, however, are more likely to be raised by a grandparent than whites or Hispanics.

Raising grandchildren can bring many joys and rewards. Providing a secure lifestyle and developing the ultimate bond is very fulfilling.  Before there was a welfare system addressing the parenting needs of children, there were grandmothers. This sentiment is echoed by Helen.

“I don’t want my grandkids to be in the system, not knowing where they at, what’s going on with them,” she said. “That’s why I’m taking care of them because my heart will feel better knowing that they OK.”

Along with the love that grandparents feel for their grandchildren and the joy of helping them grow and learn, this role also comes with new sets of challenges. The life that many grandparents had planned for their later years is no longer possible. They can also find themselves alternating between feelings of gratefulness that the grandchildren are safe, and anger and resentment at their own children’s failings.

It’s important for grandparents to acknowledge both their positive and negative feelings regarding the situation. Ambivalence, anger and anxiety are a natural response to this new overwhelming responsibility.  Helen finds herself again overwhelmed with many feelings, including anger and guilt at having to change her life yet again.  With regard to her daughter, Helen said, “I’m hurt because I keep asking myself what did I do wrong with her.” When asked about some of the difficulties with raising Elijah and now the baby, she says, “I’m hurt because I have to start over again.”

Having to deal with out-of-control adult children and the continued needs of young children is stress on your body and your mind. Helen recently found herself dealing with the results of her chronic stress. Within the past six months she has been diagnosed with diabetes and lost 30 pounds.

There is also the question of what happens to the grandchildren when grandparents fall prey to chronic illness or the many disabling conditions that occur as we age.

Veronica (not her real name), 56, had custody of her 3-year-old grandson, Kendrick. Her daughter decided, after his birth, she didn’t want children and had neglected to take care of his medical needs. His grandmother stepped in to make sure Kendrick didn’t end up in the system. She left her life in Utica and moved to Albany to make sure he could have secure and loving home.

Veronica got custody and provided him with that life until the unforeseen happened. She had a stroke and ended up in the hospital. She is currently residing in a nursing and rehabilitation center, fighting for both her health and her right to keep her grandson. Kendrick, meanwhile, is placed temporarily with other relatives.

Despite the difficulties the alternative is unthinkable.  Making sure that your loved one will not fall prey to an overwhelmed and understaffed system is often the bottom line.

My own grandparents fought in vain during the 1960s to stop that unthinkable situation from happening to their grandchildren. The prevailing attitude of that time was that in their 50’s, they were too old.

Thankfully, times have changed, and age is no longer the unforgiving barrier that it was. For Elijah, Gracie Marie and Kendrick, they will know the comfort and safety of home and the sweet, powerful love of their Guardians of Generations.

Sharon Cole is a licensed speech-language pathologist and proud grandmother. Her goal is to enhance children’s lives through love, laughter and language. Sharon can be contacted at [email protected]

HEALTH and FITNESS: What an improbable Super Bowl, football career should teach you