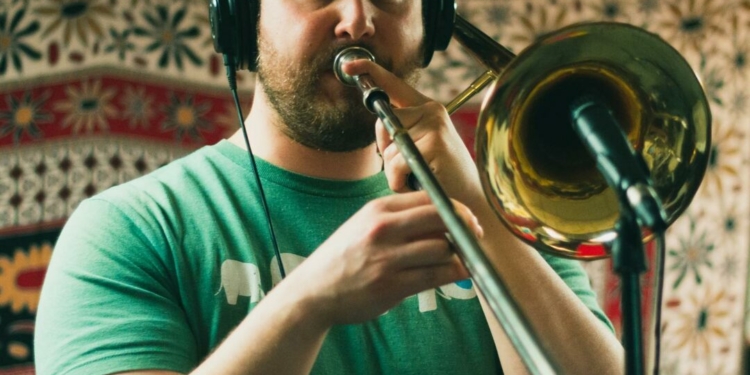 Jonathan Bintz was a music educator by profession, but many more people across the music scene recognized him as the trombone player for Millington. Photo provided by Millington

CHATHAM — Hearts from both the local music and academic scenes were broken upon learning the news of Jonathan Bintz’s death on Friday, July 2. The popular musician and teacher was 28.

Bintz spent his days as a music teacher for Chatham Central School District. His time outside of the classroom was perhaps most noted as the trombone player for the pop-punk-ska band, Millington.
Brian Chiappinelli expressed his shock online with an initial, “Damn,” before sharing his respect for Bintz. The artist manager and Bad Mothers drummer said Bintz inspired him — a confession he didn’t get to share with him.

“Jon [was] a kind, hilarious and talented soul,” Chiappinelli said. “It was always a treat watching and hearing you perform. You may not have known it but your musicianship always kept me inspired and motivated to get better.”

Bintz died unexpectedly that Friday morning. The news circulated quickly within both of his social circles. By the following morning, Chatham Central was hosting grief support for students and staff.
Bintz joined the school district staff in 2017. Within his short time there, the district pointed towards the accolades he helped orchestrate as its band director.

“He was both respected and admired by those he taught and those he worked alongside,” the district shared in a statement released on July 2. “In his time here, he helped bring the performance of our ensembles and individual students alike to new levels of achievement, which earned Chatham regional and national recognition.”

In April, Chatham Central was named as a 2021 Best Communities for Music Education by the NAMM Foundation. The foundation awards districts that demonstrate outstanding achievement by offering access to music education to all its students.

“We offer our deepest condolences to Mr. Bintz’s family, friends, colleagues, and students. He will be greatly missed.”

A mother of one of his students shared how his encouragement helped inspire her son’s love for music.
“My son had him for the first time this year,” said Mary Gearing, “and he had never played an instrument before this year. [Bintz] was very kind and caring. Without Mr. Bintz’s encouragement and understanding I don’t know how we would have made it through this year.”

A friend and fellow educator at the school district described Bintz as “respectful, thoughtful and intellectual.”

“There was no member of the Chatham CSD community that I more enjoyed sparring verbally with than Bintz,” said Jen Dilorio. “We agreed on 90 percent of everything, but the 10 percent we didn’t agree on was fun – really spirited and passionate and fun. … He made me think and reconsider and think again. And that is the great gift he gave to me again and again.”

Dilorio, who had an established career in the financial world before earning her teacher’s degree, joined the school district around the same time as Bintz. Despite the years that separated the two friends, she said he was able to bridge that gap.

“That, I am sure, is what made him an amazing educator, and human,” she said. “It took many forms with many different people, but he made all of us, colleagues, students, and I imagine personal family and friends better for having him intertwined in our lives.

“I am sorry not only for all that knew him and loved him, but for those students and colleagues and family that will never have the chance. There is just nothing right about this.”

Jonathan Edward Bintz of Albany, NY passed away on the morning of July 2, 2021 at Albany Medical Center. He was 28 years old.

Born on Nov. 24, 1992 at Albany Medical Center, Jonathan was the youngest with two older sisters. From an early age he loved to learn,explore, celebrate, bring joy and above all make music. He graduated with honors from Guilderland Central High School in 2011. As a student, Jonathan participated in several seasonal athletic programs (baseball, golf, Ultimate Frisbee). He was an advanced scholar in academics, and performed in a multitude of musical ensembles, competitions, clubs, organizations and festivals. He was a vibrant and virtuosic performer on low brass instruments, piano, and the bass guitar. He chose the Bass Trombone as his principal instrument of study and went on to build performance skills in virtually all orchestral instrumental families.

His love of music spanned genre, venue, culture and era; from romantic and classically-inclined German lied, to upbeat emotive emo-pop, progressive rock and contemporary jazz, to name a few. The breadth of his interests were evidenced in the projects and roles he undertook.Upon completion of his higher education, he accepted a position as Band Director at Chatham High School in Chatham, NY and reunited with long-time musical colleague Cody Okonski to create the pop-punk-ska band, Millington.

Jonathan had a presence that was apparent in each of his activities and relationships with others. He held himself to a high standard in pursuit of excellence, skill mastery and philosophical understanding and yet maintained an honest grounded perspective. It was through this lens that he would lead jovial and intellectual debates upon the state of the world and how to make it better. He was respected and admired by students and colleagues alike. His influence, example, talent and leadership strengthened the musical community, contributed to national recognition of Chatham’s Music Program and fostered an international community through Millington.

He was a traveler, a chef, a barista, a microbrewer, an artist, an athlete, a lifelong learner, and wholeheartedly loved those close to him. If you knew him, you already know what a blessing he was. He truly made the world brighter and was a shining example of kindness, caring, finding fulfillment and self-betterment for the good of all.

LETTER to the EDITOR: An important election this year in Colonie