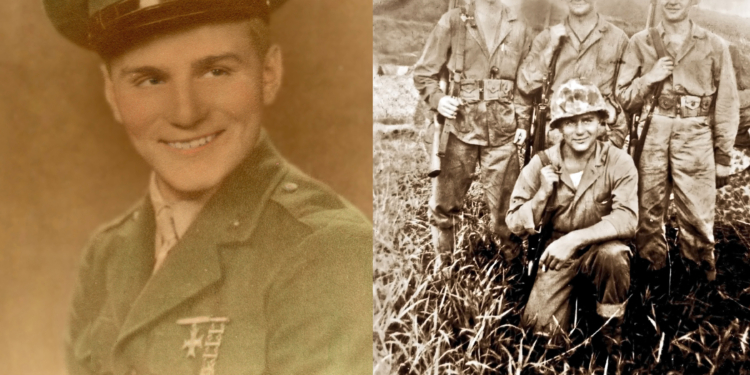 Time, the relentless foe no one can escape.

Thomas J. Smith was born and raised in Schenectady’s Goose Hill neighborhood. An excellent student and a standout athlete, he was 17 when Pearl Harbor was attacked. Between December 7, 1941 and November 28, 1942, Tom burned the candle from both ends, playing football at Vincentian High School and working the midnight shift at American Locomotive, helping build tanks for the American war effort. After almost being rejected due to a vision problem, and then a slight heart murmur, Tom enlisted in the Marine Corps.

Upon graduation from boot camp, Tom learned that he had been selected to receive additional training as a Marine Raider. The Raider battalions ultimately disbanded, and Tom then became one of the first couple dozen Marines in the newly created 4th Marine Division. He was assigned to Company F, 2nd Battalion, 24th Marine Regiment.

In January of 1944, the 4th Division became the first Marine Corps unit to go directly into combat from training. For Tom, this was “Operation Flintlock”, Marshall Islands, Roi-Namur in the Kwajalein Atoll.

In June of 1944, Tom saw combat on Saipan, followed by Tinian in July. Tom had trained as a rifleman and machine gunner, but was utilized more as a runner/scout. Because of his specialized Raider training, he was chosen to lead squads of 2-3 other Marines, usually at night, deep into enemy held territory.

February of 1945 brought Tom to Japan’s doorstep… Iwo Jima. The four amphibious assaults, which occurred over the course of one year, 19 days, resulted in nearly 18,000 casualties for the 4th Division alone. Tom was wounded four times and was the recipient of three Purple Hearts.

In 2017, Tom published his memoirs, titled Marine #419322. More information about Tom can be found on a Facebook page by the same name.

Tom carried the horrors of war, and the memories of brutal life or death hand to hand combat, with him for the rest of his life, but he never let those nightmares define him as a man. After the war he went to college, eventually earning a doctorate in education. He married his high school sweetheart Connie in 1946. They settled in Miami, where Tom became a teacher, principal, and finally a school district superintendent.

After retirement, Tom and Connie relocated to Tom’s hometown of Schenectady, NY. Their marriage lasted 67 years, until Connie’s death in 2013. In 2010, Tom had a chance meeting with a fellow Iwo Jima survivor, Sal Famularo, in the Glenville Walmart. They had gone ashore, their companies “F” and “G” side by side in the first waves at Saipan, Tinian and Iwo Jima 65 years earlier. The two Marines became and remained best friends, and would attend church together every Sunday. They regularly met at the Glenville McDonald’s and the Glenville Queen Diner, where they were always welcome. Tom and Sal were the force behind the Iwo Jima Survivors group that regularly met at the Home Front Cafe in Altamont. The last time the whole group of area survivors met was for the 75th anniversary of the Battle of Iwo Jima on February 19, 2020, just before the pandemic hit. On November 10, 2020, he attended the 245th Marine Corps Birthday Bash at Glenville’s Flightline Pub with fellow Iwo Jima survivors Ambrose “Cowboy” Anderson of Gloversville, and Nils Mocker of Westchester.

In 2013, Tom’s neighbor, Sue Clark, convinced him to allow her to escort him on an Honor Flight to Washington, D.C. and Arlington. Thus began a new chapter in Tom’s life, and in the lives of all of us who would come to know and love him. For me, the moment I met Tom was captured in a photo by my friend Jim Diegel. Tom was in line at the Albany Airport TSA checkpoint when he spotted my granddaughters Sydney and Kaitlyn, who were 4 and 6 at the time. They were standing with me in a PGR flag line, holding signs with messages to the WWII vets. Tom stepped out of line and came over to us, bending over to talk to the girls. He thanked them for being there, and asked if they had “a hug for an old man”. This simple gesture earned Tom a place in our hearts forever.

Tom passed away on May 13 after falling ill on April 16. To say he will be missed is a gross understatement. He will be laid to rest alongside his beloved Connie next week. He has been a fixture in so many of our lives and the void we are all left with is massive. We will never forget this loving, humble warrior, and the myriad ways in which he enriched our lives.

Editor’s Note: Mark Yingling has organized several gatherings for local veterans at the Pollards’ Home Front Café in Altamont and has befriended many of them over the years.

OBITUARY: James Corbett was the face of Bethlehem Police Department to generations