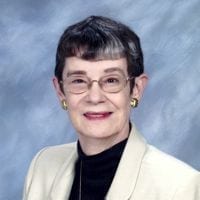 She was the beloved daughter of Mary and Elwood Brown, born in Harrisburg, PA on January 7, 1938. She was a graduate of John Harris High School in Harrisburg and American University where she was a member of Delta Gamma and Cap and Gown.

She was employed in the office of the Secretary of the U.S. Department of Commerce in Washington, D.C. and the U.S. Bureau of Public Roads in Albany, NY. In Albany, she also worked in the offices of Dr. Bedrosian, Dropkin, and Costello for 22 years.

In Albany she was a member of Albany Panhellenic Association, the Albany Medical College Faculty Wives Club, the Junior League of Albany, the Delmar Progress Club, and the Delmar United Methodist Church.

After her move to Sheridan, WY, she was active at the Sheridan Senior Center and the Sheridan United Methodist Church.

Online condolences may be written at www.kanefuneral.com

Kane Funeral Home has been entrusted with local arrangements.