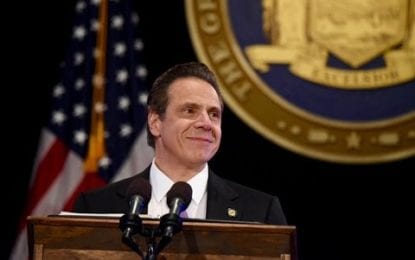 NEW YORK CITY — New York State will now hold gun manufacturers liable as a “public nuisance.”
Gov. Andrew Cuomo signed a series of bills into law on Tuesday, July 6, targeting firearm sales within the Empire State. The first states gun manufacturers cannot endanger the safety and health of the public through the sale, manufacturing, importing or marketing of the products they sell. The second prohibits the sale, purchase or transfer of firearms to anyone known to have an outstanding warrant for a felony or serious offense.

“Of all the challenges we face every day in New York, few are as difficult to bear as the scourge of gun violence plaguing our communities,” Governor Cuomo said. “The only industry in the United States of America immune from lawsuits are the gun manufacturers, but we will not stand for that any longer.”
The state Attorney General and any city corporation counsel can take action on behalf of any locality, as can members of the public, corporations and associations. Since 2005, a federal law called the Protection of Lawful Commerce in Arms Act has shielded bad actor gun manufacturers and dealers from most lawsuits.

The new laws now open opportunities for lawsuits where reasonable controls and procedures are not in place, ensuring that responsible manufacturers and dealers will not be held accountable for the actions of criminal actors. Cuomo cited the move as necessary in order to close an “destructive Trump loophole.”

“I am not only signing a new law that does away with this immunity, giving New York the ability to hold them accountable, but also closing the destructive Trump loophole which has allowed people with active warrants to purchase guns for far too long,” said the governor. “Now, if you have an active warrant, you cannot buy a gun in the State of New York, period.”

SafeWise, a Utah-based security research firm, cited a recent survey in which it states New Yorkers are second only to Illinois over fears of gun violence.

According to SafeWise’s State of Safety in America in 2021 survey, 80 percent of New York residents are “highly concerned” about gun violence daily, much higher than the US average of 53 percent. Of those New Yorkers, 73 percent worried a gun violence incident would happen to them–that number is higher than in any other state.

The firm asked over 5,000 Americans nationwide.

In early 2017, the U.S. Department of Justice reinterpreted a gun purchase prohibitor of the National Instant Background Check System to include only those individuals who have fled from one state to another for the purpose of evading prosecution for a crime while subject to an active or imminent arrest warrant versus those subject to any arrest warrant.

“For far too long, most guns recovered from violent crimes and shootings in New York are trafficked in from out-of-state, yet the gun industry in the United States enjoys special protection from civil liability under a 2005 federal law known as PLCAA,” said Assemblymember Patricia Fahy (D, Albany). “It will be an effective tool to leverage in the fight against gun violence this year in New York State and shift the national conversation.”

The new legislation places added risk on gun manufacturers like Utica-based Remington Arms Company, founded in 1816. The rifles it produces can now be considered a public nuisance even if it did not purposely cause harm to the public. The rifle company was silent following the governor’s announcement last week. Other opponents, however, spoke out before he signed.

Assemblyman Chris Tague (R,C,I-Schoharie) expressed anger and disappointment last month.
“These bills are nothing less than a direct violation of New Yorkers’ Second Amendment rights, and a blatant attempt at regulating gun stores in this state out of existence,” said Tague. “Make no mistake, if the radical politicians pushing these bills had the capability to, they would scribble over the Second Amendment of our constitution on the very parchment it was written on hundreds of years ago. Given the liability this legislation places on gun dealers in our state, they may as well have done just that, as anyone selling firearms here can now easily be sued out of business.
“Today is a dark day for liberty here in New York.”