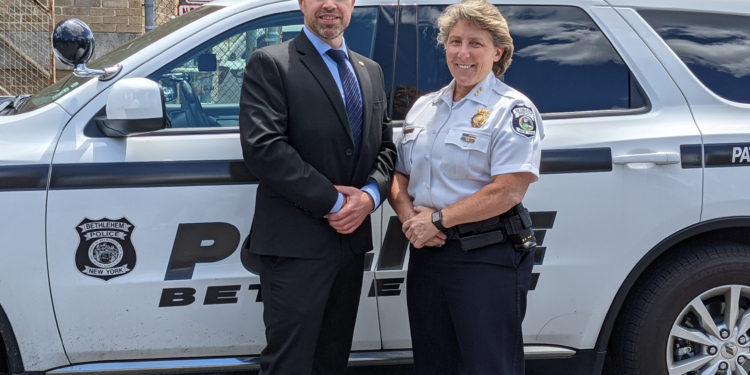 Just 50 chiefs and sheriffs from departments around the country were chosen for the first of its kind program. Instruction consisted of seminars on topics related to four key themes: Study of Emerging Trends, Enhancing Partnerships, Promoting Wellness, and Seeking Innovation. Local agencies were also briefed on the services the FBI can offer departments, such as behavioral analysis and laboratory testing.

“This was an amazing opportunity for us,” said North Greenbush Police Chief David Keevern. “We can’t thank everyone involved enough, from ASAC Magnetto at the Albany Field Office to SSA Jim Moore and the incredible instructors down in Virginia. The classes were outstanding, and the connections made with our classmates opened the door to future networking and brainstorming opportunities that will prove even more lasting.”

“I was honored to be nominated by ASAC Magnetto at the FBI Albany Field Office to participate in the inaugural session of the FBI’s National Command Course at Quantico,” said Bethlehem Police Chief Gina Cocchiara. “To be selected to be a part of an amazing group of Police Professionals comprised of Chiefs and Sheriffs from across the country was an opportunity of a lifetime. The ability to network with such a wide variety of talent was invaluable. The course instruction and content were outstanding and highly relevant for today’s policing needs. We could all see that the FBI really put a great deal of effort into making this program a great success.”

The FBI found most agencies lacked the funding and personnel needed to send command or executive staff to the FBI National Academy, so they collaborated with several agencies and organizations to create the program.

The weeklong course will run twice a year and comes at no cost to the municipalities, as it is completely covered by the FBI.