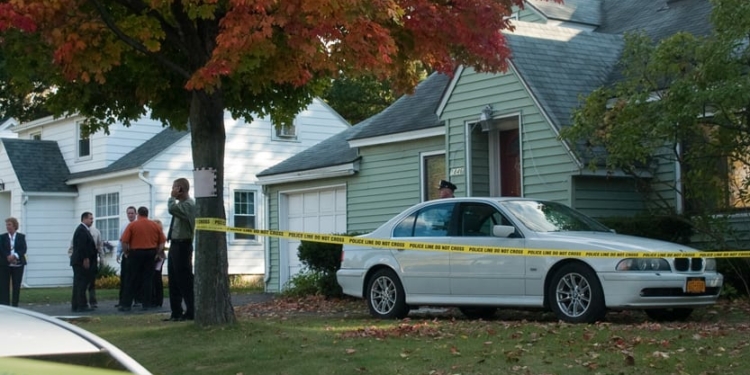 Two Guilderland Elementary School students, ages 10 and 7, along with their parents, were apparently murdered in their Western Avenue home, according to police. Authorities as of Monday morning, Oct. 13, had not named a suspect.

State Police on Friday, Oct. 10, released the names of the two adults found murdered in a Guilderland home on Wednesday, Oct. 6., as Jin Feng Chen, 39, and his wife, Hai Yan Li, 38.

Troopers are not yet releasing the names of the two slain boys because of their age. Police have confirmed the two younger victims were the couple’s children.

Town assessment rolls list Chen as co-owner of the home where his body was found, 1846 Western Ave., with Kam Ping Lo as the other owner. Chen was also listed as the owner of the adjacent property, 1848 Western Ave.

Law enforcement officials on Thursday, Oct. 9, gave few details on the bodies found inside the home at 1846 Western Ave.

“Everything that can be done is, in fact, being done,” said Albany County District Attorney David Soares. “We have a collection of law enforcement personnel unlike I have seen in our community responding to information and conducting this investigation.

Soares said two autopsies would be performed Thursday afternoon, Oct. 9, but he could not confirm on which victims. He said after autopsies were performed, authorities would have “a better idea” how they were killed.

There are Cantonese and Mandarin interpreters being used to help interview people about the murders, according to Soares. He said people continue to come forward with information.

“Certainly the language barrier presented some challenges that we are effectively looking to overcome,” said Soares.

The FBI is also providing assistance in the investigation, according to Soares. Several dozen members of law enforcement agencies have worked on the case.

State Police are asking anyone who may have seen anything suspicious prior to the victims being discovered, or believe they have relevant information, to call the investigation’s special tip line at 1-800-GIVE-TIP (1-800-448-3847) or email [email protected]

Soares stressed authorities are not concerned with “collateral issues,” such as illegal immigrants, but are focused on “bringing people to justice, who brought harm upon our family members in this town.” He said people should not fear coming forward.

Soares tried to quell any concerns neighbors might have regarding their safety.

“At this point, we don’t believe that neighbors have much to fear,” said Soares. “Our preliminary findings would indicate that this is not an instance where neighbors should be concerned, or people should be living in fear.”

The district attorney said the “collective wisdom and experience” of investigators and prosecutors determined other residents are not in danger.

Soares declined to elaborate on whether the murder appeared random or deliberate. Soares said understood why the “tight-knit community” was concerned. “These are not the kind of acts that occur in wonderful communities like Guilderland,” he said.

A relative called for medical related assistance Wednesday afternoon, Oct. 8, which led police to discover the bodies, according to authorities. The bodies remained unmoved for several hours, with the scene intact.

The two-story home and both adjacent houses were cordoned off with police tape after the bodies were discovered, and Western Avenue was reduced to one lane during rush hour, leading to traffic delays.

Police said media reports of a third child living in the home were incorrect. State Police Capt. Scott Coburn said there was a “niece” that would often visit the two boys at the home, but she was not present during the incident.

Coburn also disputed media reports of a boy collapsing on the front lawn of the home after the bodies were found. He said that person was the sister of one of the victims who was upset and eventually taken by police.

Soares was not aware of there being any other quadruple homicides in the Capital District.

“Anytime you have harm that falls upon families, especially with children, I think that regardless of culture, people are going to overlook some of those issues and want justice,” said Soares, “so that is what we are hoping for.”

Guilderland Superintendent of Schools Marie Wiles said the two murdered boys had been enrolled in the district for about two years, with one in second grade and the other in fifth grade.

“Our faculty and staff are prepared to help students should they need to talk,” said Wiles on Thursday, Oct. 9. “We all agreed that we would tell the truth … based on the questions that would come from the students, our teachers would respond appropriately.”

School district officials said they are respecting authorities’ desire to not disclose their names, along with other information. The elementary school did go on lock out for a period of time Wednesday, Oct. 8.

“If we were closed, we would have children all over the community, home without any support, watching the news and hearing things that might make it even worse,” said Wiles. “We feel we have the kind of supportive environment in the building, in the district, to be the best support for kids.”