The line of duty 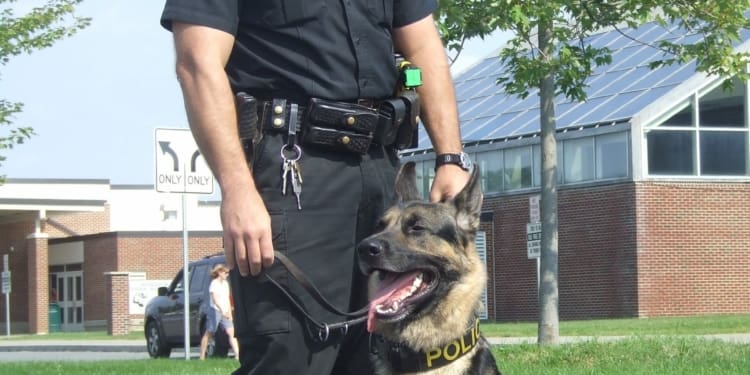 For nearly a year, officer Patrick Strollo has taken his partner George out on the beat with him. They’ve found emotionally disturbed people, criminals and narcotics together. Yet every day he’s in the field, Strollo is a little nervous, because George isn’t as well protected as he is.

“I’m very careful right now knowing that he’s vulnerable if somebody has a gun. I just might leave him in the car. If there was a situation where I couldn’t, I would just make sure I was even more alert,” Strollo said. “Anybody that’s unprotected, whether it’s human or an animal, shouldn’t be victimized.”

Knowing the department has a tight budget, Bethlehem High School senior Rachel Piccolino decided to take her canine adoration to the next level by raising money through local animal shelters and hospitals to purchase a $1,200 ballistic vest for George. After collecting about $200, she’s now asking the community to help pitch in whatever they can to not only help buy George a vest, but vests for two other dogs soon to be a part of the county’s K-9 Unit.

“I’ve always been a dog lover. I have a black lab at home. I think it’s so important to protect these dogs,” Piccolino said. “They’re heroes.”

Piccolino decided to start up her own fundraising website through giveforward.com and is asking for donations. She said her original goal started with buying only one vest for George, but she hopes to raise $3,000 to buy all three vests.

The Sheriff’s Office K-9 Unit has a second K-9 who is in the K-9 Police Academy completing a 20-week program. Once finished, another dog will be added to the academy.

Albany County Sheriff Craig Apple reflected on the FBI dog that was killed in a shooting in Herkimer this spring.

“You pray to God nothing happens to the dog. These dogs risk their lives for the officer all the time,” Apple said. “We’re grateful Rachel took the initiative to raise the money. I think it’s a great cause. I can’t thank her enough for bringing it to the surface.”

Apple said if they exceed the goal, they plan to help other K-9 Units in the area purchase vests for their dogs, if needed.

“It’s really great. It’ll be very well used, whether it’s George and the other dog, or there’s enough for other canines in the area,” Strollo said.

About to enter her senior year at Bethlehem, Piccolino said she is interested in studying medicine in college, possibly taking a look at veterinarian studies. Right now, she enjoys her time with her lab, Tucker.

“There’s the whole thing about if you have a dog, you live longer. I definitely believe that, because my dog is absolutely my best friend,” Piccolino said.

The fundraiser is online at giveforward.com/fundraiser/stx2/protect-police-paws.

Letter: With vote intact, use it on Brent Meredith