A trail of troubles 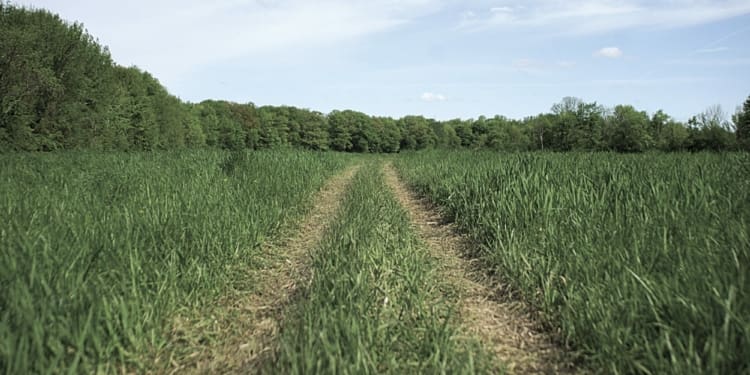 The two arcing lines worn across an empty field in Selkirk stretch on seemingly forever. In reality, they run for 2,400 feet, nearly half a mile, or the entire length of the remote field surrounded by forest.

The lines in the grass have been worn in over time by ATVs – all terrain vehicles – that use the field not only as a place to do doughnuts and joyride, but to connect from roadways to the nearby city water line easement or power line corridors.

Mike Waldenmaier owns the land these tracks pass through. It’s been in his family for more than 80 years, and in that time there has been all manner of unauthorized use of it. But recently, he said, things have gotten worse.

For him, the few miles from the suburban bustle is a good place to relax and reflect. That’s why he spent many hours moving the stonework from an old bridge across the Vloman Kill to create a secluded spot to sit and a retaining wall to keep the banks from eroding.

That was about four decades ago. But recently, Waldenmaier slid down a hill to the banks of the tiny river to find the stones uprooted and tossed into the stream, his secluded hideaway destroyed. To him, this goes well beyond getting kicks from joyriding – it’s a distinct disrespect for his land.

“It stops when we pursue it for a while … then it starts back up,” he said.

More than a joyride

Vandalism aside, some might see ignoring one of the many posted signs around Waldenmaier’s property as a victimless crime. But what might seem to be tracks on an empty field few will ever lay eyes on is a real problem for farmer Douglas LaGrange. The LaGrange Brothers Dairy Farm rents the use of two large fields from Waldenmaier and harvests the grass for haylage that will eventually be fed to the farm’s cattle. Working with Cornell Cooperative Extension, LaGrange figured the impact of the two 2,400-foot long wheel ruts will be about $1,000 in labor and lost harvest.

“There’s a very valuable crop there even though it looks like an open field,” said LaGrange, who also sits on the New Scotland Town Board. “It’s a tremendous investment on our part, and it goes back to we need every blade of grass to recoup that investment.”

Trespassing is not a new problem for farmers, though it can be an inconsistent one, said John Mead, president of the Albany County Farm Bureau. For some, there’s nary a problem. For others, it happens so often crops and property are destroyed.

“One of the reasons I think we have so many problems in this area is there’s a lack of farmers,” Mead said. “A lot of the state is more rural, and I think it’s more in areas like this that’s close to villages.”

The state Farm Bureau’s public policy calls for more stringent penalties for those trespassing on private land using ATVs, and also suggests the state use a portion of ATV registration fees to develop public use off-roading trails on public land to discourage trespassing.

In some instances, it appears riders will cut across private lands in order to access open areas like power line or water line easements or railroad tracks. Entering these constitutes trespassing, as well, and the areas are typically posted and sometimes gated.

“We definitely do see it as a problem. It is something that we try to deter people from it as much as we can,” said Patrick Stella, a spokesman for National Grid.

Stella said the maintenance done to allow crews access to the power lines creates open paths attractive to ATV users or snowmobilers, but the equipment makes them dangerous, too. He added in the eastern New York area, there are even issues pertaining to endangered species.

“A lot of our rights of way are home to the Karner Blue Butterfly, mainly because a lot of the things we do there promote low-growth plants,” Stella said.

National Grid presses charges against those found trespassing on its land, and Stella added anyone who witnesses trespassing is urged to call local law enforcement or National Grid.

It is difficult to put an exact measure on unauthorized off-roading activities for the simple fact it goes unnoticed or unreported so often. Those familiar with it can only acknowledge it happens with great frequency.

The Bethlehem Police Department recently arrested three individuals who were riding ATVs on Waldenmaier’s property. All three were town residents and were ticketed for trespassing, which is a violation. They weren’t directly apprehended by the police, though – Waldenmaier stopped the riders and detained them until police arrived.

The Bethlehem Police Department does not have ATVs or snowmobile units in its arsenal, and even if those tools were available, finding officers to put into the field would be difficult, Heffernan said. The priority is generally to have police on the road, patrolling the town.

“It’s very difficult for us; we just don’t really have the resources to combat this issue,” he said, adding the idea off-road police work might be given some immediacy once more of the county Rail Trail is officially opened to the public.

Waldenmaier said the Bethlehem police have been responsive to his complaints, but also acknowledged suburban law enforcement can only be expected to do so much.

“The cops are doing as much as they can. The bottom line is, the police do not have he capacity to catch these guys,” he said. “They need the equipment to be able to chase them.”

No solution in sight

Without a concerted (and likely expensive) police enforcement effort, a solution to the problem is elusive. Waldenmaier suggest it’s a major one, though. He has been vocal in the past on town planning issues, including sitting on the town’s Citizens Advisory Committee on Conservation, and to him, the trespassing on his land is a microcosm of bigger issues in a town where preservation of open space ranks high on the agendas of many policymakers.

Among the ways to preserve open space is to work with landowners to either create conservation areas through tax breaks or to encourage agricultural use of land. Persistent trespassing and vandalism can make keeping open land more trouble than it’s worth, Waldenmaier argued.

“We’re saying you need to address the problems that the landowners are having. And to me, that doesn’t really seem like a topic to them,” he said.

The town is in the midst of reviewing its comprehensive plan, and open space policy will be a component of that review. Bethlehem Supervisor John Clarkson said he hopes the Comprehensive Plan Assessment Committee’s findings will be ready for review at the June 12 Town Board meeting, but when it comes to trespassing, he said that’s difficult to address legislatively.

“That’s a law enforcement question, not so much a land use regulation question,” he said.

There also exists the theory that such interactions are inevitable in a town in which more housing options are popping up in the countryside. For Mead, the matter can be boiled down to a loss of respect for and understanding of one’s neighbor.

“It’s difficult. I don’t know what the answer is,” he said. “I don’t know if anybody does.”

Heads up for safety