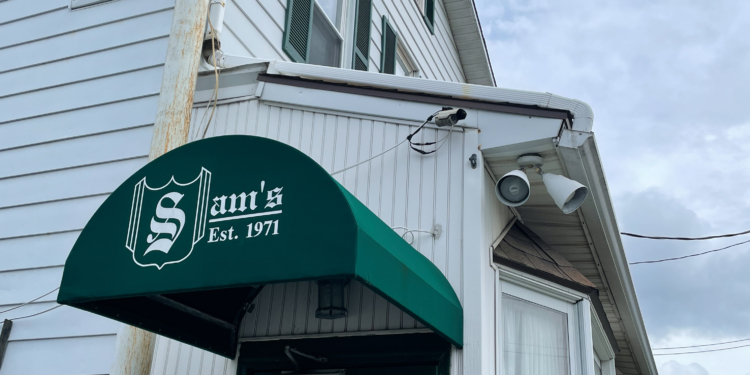 A neighbor across the street from Sam’s Italian American Restaurant yelled out from his front stoop. The day before, someone hung out a sign on the eatery’s front door stating it was closed.

The handwritten sign read: “The restaurant is closed. Thank you for a great 50 years.” The same message was captured on the answering machine inside. The intimate dining room held countless stories. A picture of wrestling great Andre the Giant hung just off the bar, as did several more celebrities who had visited. But, they didn’t hold a candle to all the first dates and family dinners it hosted through the years.

“I have been enjoying my favorite Italian meals for over 30 years here,” said Tim Dietz, “and I know my grandparents, Bob and Esther Deitz, will always have their footprint [here].”

The Rappoccio family had just celebrated 50 years on the corner of Southern Boulevard and Kehoe Street. As the old neighborhood stories go, the family started out selling slices of pizza from their garage.

“It is with heavy hearts that we announce; Sam’s Restaurant has closed its doors,” another announcement shared on Facebook. Carmela Daubney, 73, and her brother Paul Rappoccio, 71, have owned the restaurant since taking it over from their parents, who opened the restaurant in 1971. The two siblings initially worked for their parents. “After 50 years of serving first slices then serving dishes then drinks to our loyal, endearing customers, we have decided to close.”

The news reached beyond Albany. Ken Ringler, former Bethlehem Town Supervisor, shared his condolences over the restaurant’s closure on Facebook.

“Carmella, so sorry to hear this,” Ringler stated. “Your family’s restaurant is an Albany institution and will be missed! As you know, since Marty and I moved from the area, we have always made Sam’s a must visit when we were in town. Best wishes to you and enjoy a well-deserved rest.”

The owners cited several factors behind their decision, reasons all too familiar with local eateries that have struggled to survive since the COVID outbreak. Rising food prices and a depleted workforce forced Daubney and Rappoccio to close their doors.

“We did our best to stick it to COVID and stand to our values,” they wrote, “amongst other issues have forced our hands.”

The online message continued to thank their customers, many of them regulars who they adopted as a “large part of our lives.”

“Some of you have been eating our food since before we were a restaurant and were slinging slices to the neighborhood,” they wrote. “Others had their first date at Sam’s. Still more were born and raised on Sam’s food, eating it as far back as they can remember. We thank all of you.”

SCRI poll: Some New Yorkers emerge from COVID-19 heavier, some depressed and some with a new hobby