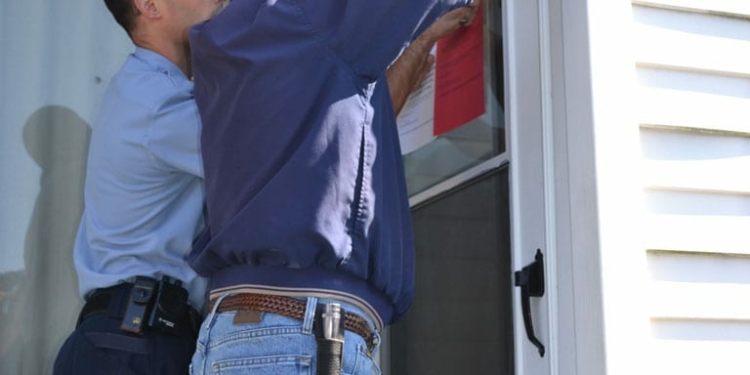 Citing unsafe living conditions due to multiple code violations, Town of Colonie officials shuttered a Latham building on Friday, Sept. 19, that was functioning as a business and residence.

The two-story building at 470 Troy-Schenectady Road was deemed uninhabitable, and its seven to 10 residents were force to leave. Two businesses operating on the first floor also had to close.

“The conditions are really horrible. They are unsafe. There are so many different problems with the structure — mold, open sewer vents, gas lines, electrical issues … One of our main concerns is for the people that are in there,” said Colonie Supervisor Paula Mahan.

Numerous violations were first discovered in March after a routine inspection, and building owner Kim Chee Chun was made aware of the violations and given time to bring the building up to code. Chun owns the Ala Shanghai Chinese Cuisine restaurant adjacent to the property. The restaurant was not part of the shuttered property.

Town attorney Michael Maggiulli said the building that was shut down was in such poor condition that it looked like it was being propped up with 2-by-4’s and 4-by-4’s.

“It looks like this has been an ongoing deterioration to the structure,” said Maggiulli. “They are apparently doing some work inside, but they have no permits for the renovation work. The electrical and the gas is what frightened us the most. We don’t do this lightly, it’s just so bad.”

The next step is to have engineers examine the building and see if it needs to be demolished or if it’s salvageable.

“They need to get an electrical engineer and a structural engineer to evaluate the building, and based on that report that we receive, it will determine what’s going to happen to the building. If it’s going to have to be demoed or shored up,” said Paul Sheppard, Colonie building department manager.

The people living on the second floor are also employees at Ala Shanghai, although the structure wasn’t designed to house numerous people.

“It’s not an apartment; it’s a place where people live,” said Sheppard.

The residents were told to get what they would need for the weekend because no one would be allowed back in the building without a town official escorting them.

The two businesses on the first floor, Labor Ready and One-Step Beauty Stop, were also forced to evacuate. Labor Ready has an office in Schenectady, but the beauty salon does not have a second location.

“I believe when they understand the condition the building is in and that this is about their safety, they will understand why we’re here,” said Mahan. “This is never an easy thing to do, but the priority is to keep people safe. We wouldn’t be doing this unless it was absolutely necessary.”