Voters say Hochul did not make progress on several 2022 goals 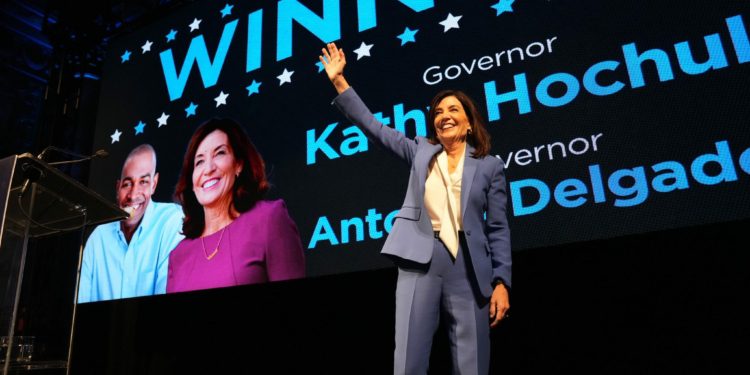 LOUDONVILLE — In voters’ eyes, Gov. Kathy Hochul did not make progress on six of the goals she laid out for 2022, including making communities safer, enhancing trust in state government, transforming SUNY into the envy of the nation, and making the state a place people want to live, not leave.

According to a Siena College poll of registered New York State voters, crime and cost of living top their priority list for Albany to address next year.

The poll revealed Hochul’s favorability rating (45-43 percent) and job approval rating (49-44 percent) had both dipped since October, but remain in positive territory. Her gubernatorial opponent, Republican Lee Zeldin, now has a 46-32 percent favorability rating, up net 18 points, from 37-41 percent prior to the 2022 election.

Siena College pollster Steven Greenberg recalled asking voters in January if they thought the governor would make progress on six of the goals she outlined in her State of the State address. While they were “somewhat optimistic” on two items and divided among the other four, he said today’s voters seem to be in agreement now 11 months later.

The obvious demarcation of opinions resides within party afflictions. Democrats were very optimistic in January. Republicans were not optimistic, and now say she did not make progress on any of her goals. Independents are agreeing with Republicans on this, Greenberg said.

“Hochul’s job approval and favorability ratings are above water, barely, although they edged down slightly since before Election Day, and her 43 percent unfavorable rating is a new high. Having just won her first full term – in the closest gubernatorial election in decades – Hochul has a chance to hit the ‘reset’ button and try and reintroduce herself to voters outside of a messy midterm transition and a fiercely fought election,” Greenberg said.

Hochul had declared victory shortly before the clock struck twelve on Election Night. The following morning, she had garnered 52 percent of the 5.6 million votes to beat Zeldin. November’s results were closer than anticipated. In August, Siena reported a 14-point lead for Hochul. Now the research institute said the governor has her “work cut out for her.”

“Certainly, political friends and foes alike will be watching to see if Hochul tries to reset in her upcoming inaugural address and State of the State and budget messages. They’ll also be watching her actions and words in the weeks and months ahead, and whether it impacts her standing with voters,” Greenberg said. “Hochul has her work cut out for her, having barely expanded her base in her first year as governor. In Hochul’s first month in office, September 2021, 42 percent of voters viewed her favorably. Today it’s 45 percent. It’s never been higher than 47 percent.