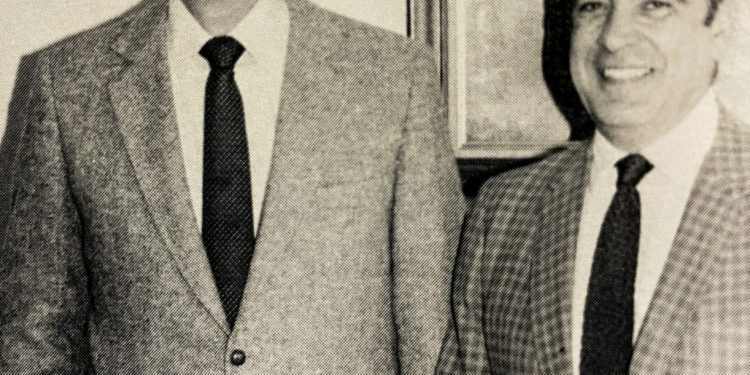 DELMAR — Frederick C. Burdick, a popular educator known best as principal by generations of students at the Bethlehem Central Middle School, died on Friday, Oct. 28, at the age of 91.

His peers described him as a “very traditional guy” while his boss called him a “true elder statesman,” yet he was praised as an innovator and for his flexibility to change.

“I’ve never worked with a better, more effective principal,” then Bethlehem Central Superintendent Leslie Loomis said in 1994, three months shy of Burdick’s planned retirement from the school after 37 years with the district. “Fred is a true elder statesman, with complete mastery and awareness of every aspect of principalship.”

A native of Clinton, just outside of Utica, Burdick earned an undergraduate degree from Hamilton College before proceeding to Albany State Teacher’s College to obtain his master’s degree.

His teaching career would be put on hold as he went off to serve two years in the U.S. Army during the Korean Conflict. Once he returned to civilian life, he was hired by Bethlehem Central to be a high school English teacher.

Burdick seldom, if ever, walked the middle school halls without wearing a full suit and tie. He stood tall, with a slender frame, and he had a quiet demeanor about him. Nonetheless, he possessed a deep, baritone voice that would snap everyone at attention whenever a student stepped out of line.

He’d be tasked with wrangling students under control once he was named the high school’s first assistant principal In 1957. He’d also be responsible for phasing out the junior high school structure, which instructed grades seven to nine in one building. The current instructional model would be adopted in 1969, a year after he was named principal of the new middle school.

In addition to his role as the school’s head administrator, he was the health education training coordinator for eight school districts. As the culture around the country changed around Vietnam War protests and illicit drug use, he spent the early 70s training teachers from fifth to seventh grade on how to impress upon children the dangers of tobacco, alcohol and drug abuse.

Author Beth Anderson turned to him while composing her book on the history of the school district. Like the two generations of students who walked through the school building on Kenwood Avenue, she knew him from her time as a student, then as a substitute teacher.

“He was gracious and informative,” she said. She added how he was responsible for introducing a foreign language curriculum to the school, sharing knowledge from her research. “Fred really ran with that mid-1960s middle school trend.”

In 1993, just a year before his retirement, Burdick was honored as the Capital Area School Development Association named him Principal of the Year. The award followed a year in which he shepherd a shared decision-making process, restructuring the building’s leadership hierarchy that allowed for a collaborative share of authority. What evolved into the School Improvement Team and the Restructuring Task Force produced a new, daily constructional schedule that increased class time by 25 percent.

“He’s a very traditional guy, and I thought he’d never give up his authority,” Robert Salamone said afterward. “It’s unusual to see someone so late in his career grow so much.”

Burdick was a well-read man who while in retirement would pen a book of his own. He held varied interests that coincided with his commitment to the community, having served as chief Election Inspector for the Bethlehem Central budget voting and the Albany County District 12 primary and national elections. He was also past president of Bethlehem Tri-Village Nursery Board of Directors, Bethlehem Lions Club and Bethlehem Teachers Association, the latter from which Rex Trobridge knew him best.

Trobridge has the distinction of knowing Burdick in three roles — from that of a student, a father, and later as the National Education Association representative for the Bethlehem Central Teachers Association.

“He was always a gentleman and consummate educator who truly cared for the students under his charge,” he said, “even sometimes-reluctant students like me, and for his community. He touched many lives, and will truly be well-remembered.”

Burdick’s picture is among the other educators who served as the school’s principal, hanging in the front foyer between the school’s auditorium and gymnasium. Even as the decades passed, those who followed his lead were often reminded of his reputation.

“While our time here in the district never overlapped, Fred Burdick’s reputation was well-known to me during my own tenure as principal at the middle school,” said Bethlehem Central Superintendent Jody Monroe. “He was well-respected across the school community having spent his entire career at BC, first as a teacher and then as an administrator. As principal, he oversaw the school’s transition from a junior high that served students in grades 7 through 9 to the 6-8 middle school we know today. His leadership and guidance at BCMS helped improve teaching and learning for thousands of students.”

In retirement, he worked at Capital Region BOCES, helping in the regional scoring process for the fourth, sixth, and eighth-grade New York State ELA Tests. He also remained active within the church just down the street, St. Thomas the Apostle. There, served as a communicant and Eucharistic Minister of the Church of St. Thomas the Apostle, and as the Pastoral Council with the St. Thomas School Board. He also involved himself in committees of finance, buildings and grounds, auditing and more recently on the Diocese of Albany Pastoral Council.

Burdick was predeceased by his wife and best friend of 60 years, Patricia Curry Burdick, and by his older brother and sister, H. Blake and Diane. He is survived by their four children, Mary, Peter, Melissa and Thomas; his brother Daniel; eight grandchildren and several nieces and nephews. His life will be celebrated in a Mass of Christian Burial at St. Thomas the Apostle Church, 35 Adams Place, Delmar, NY on Monday, Nov. 7, at 10:30 a.m. Calling hours will be held on Sunday, Nov. 6, from 2 to 5 p.m. at the Daniel Keenan Funeral Home, Inc., 490 Delaware Ave. Albany.

“The good values of Bethlehem students and parents have been a constant,” Burdick told The Spotlight before he left the school. “I will miss the students, the faculty and the many parents who were most helpful, particularly in the last 10 years.

“Bethlehem is a very good community to work in.”

Pushing pedals to raise funds for the American Stroke Association