Study: Area cost of living is going down 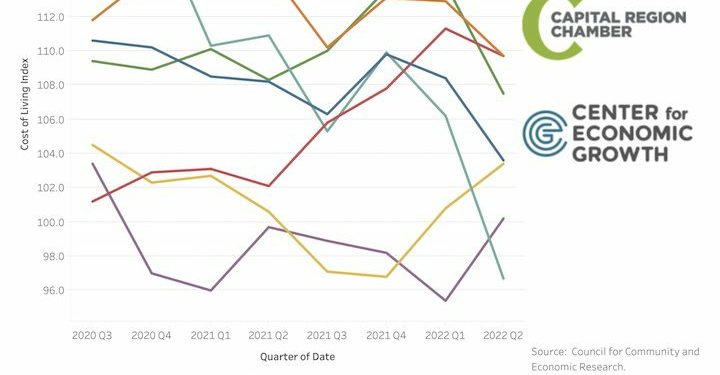 Despite nationwide increases in housing prices, mortgage rates and overall inflation, the commission has observed an overall decrease in the cost of living.

“We are in a post-COVID period and while other locations are experiencing inflation, the Capital Region has seen an overall decrease in cost of living,” the commission stated in its last quarterly report. “The only two significant increase observed in the data was transportation and utilities.”

Compiled by the Council for Community and Economic Research, the commission’s Composite Index, which serves as an aggregate of all the categories measured in the COLI Index, has been steadily decreasing. Last year at this time it was at 106.3 and last quarter it was 103.4. When data is collected, it is converted to a scale that puts the average cost for each index at 100.

Cost of Living collects data from cities across the country and tracks changes in the cost of vital goods and services that contribute to an overall cost of living. Data on grocery items, health care, housing, miscellaneous goods and services, transportation and utilities is compiled into separate indexes. A Composite Index, which combines these separate indexes, is created to show the general trend for the cost of living in different cities and metropolitan areas.

The data for the Capital District is collected quarterly by graduate students enrolled in the Department of Geography and Planning at the University at Albany and is funded through a partnership among CDRPC, the Capital Region Chamber of Commerce, and the Center for Economic Growth. The methodology, data requirements, and parameters of the data collected are consistent nationwide to assure comparability among the participating regions.

Letter to the Editor: Vote Yes on Proposition 2