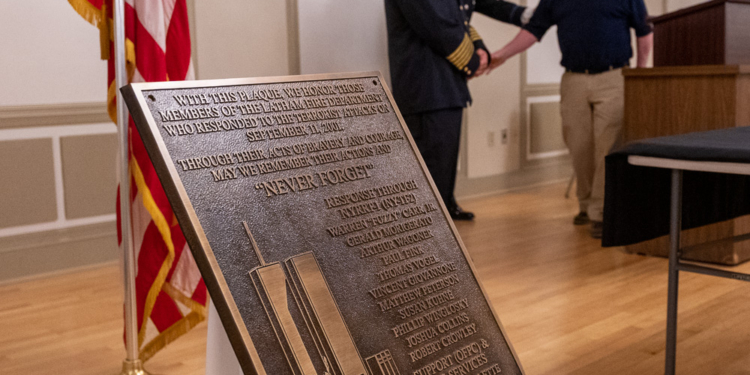 This year, on Sept. 10,  the Latham Fire Department honored members who went to Ground Zero after the worst terrorist attacks in our nation’s history. Each of the members who travelled to New York City as part of a search and rescue operation received a medal and a bronze “Never Forget” plaque was unveiled with their names on it that will hang at the department in perpetuity.

And the South Colonie School District held its annual ceremony at the Hill of Heroes outside the high school featuring Gold and Blue Star Mothers and many of the town’s emergency personnel.

Shortly after the planes hit the World Trade Center on Sept. 11, 2001, the state Office of Fire Prevention and Control implemented an emergency plan to activate all fire companies state wide, including the Urban Search and Rescue Team from the Capital District. The approximately 100-member team — including 13 from the LFD — was on site for several weeks assisting the NYFD in its search and rescue and other efforts.

“In the time I was down there, the team was broken up into several squads, with five or six guys per team, and we were given assignments and we went in and did what was needed. There was no complaining. Everyone down there did what they were asked to do,” said Latham Fire Department Chief Vincent Giovannone. “At no time did anyone complain about anything. There were still things on fire. Explosions. It was a hazardous condition to be in. If there is one thing I want to relay here was the selflessness we all had to go down there and do what needed to be done.”

In addition to flying planes into the World Trade Center towers on Sept. 11, 2001, terrorists also flew a plane into the Pentagon killing 125 on the ground and all 64 on board. A third hijacked plane was believed to be headed for the White House or the U.S. Capitol or possibly Camp David or any one of several nuclear plants along the east coast but passengers overtook the terrorists and crashed the plane in a Pennsylvania field before it could reach its devious destination.

The “Never Forget” theme 21 years later is etched into the plaque at the Latham Fire Department and was in the hearts and minds of others around the world.

“When we say ‘we will never forget’ they are not just words. It must come from our hearts and it must not be just one day a year when we remember all those who gave so much that dreadful day but we must remember every day,” said Donna Abare, president of the Capital Region Chapter of the Blue Star Mothers of the United States, at Colonie High. “As we go about our everyday chores, someone is running into a burning building and saving lives and someone is protecting our streets so when we see our firefighters, our EMS personnel or police officers, thank them.”

Nearly 3,000 people died on that day including 2,753 at the World Trade Center, 184 at the Pentagon and 40 in Pennsylvania. The 19 terrorists also died and the U.S. and the world spent years hunting those responsible for planning and financing the plot.

“As a nation we join together to mourn the senseless loss of life but also to celebrate the bravery and heroism of so many military, police, fire and EMS personnel that risked their wellbeing to help their fellow Americans on that fateful day,” said town Supervisor Peter Crummey. “As we gather today, as we continue to grieve, we also come together to thank those heroes that defend our security and turn away any threats to our great republic.”