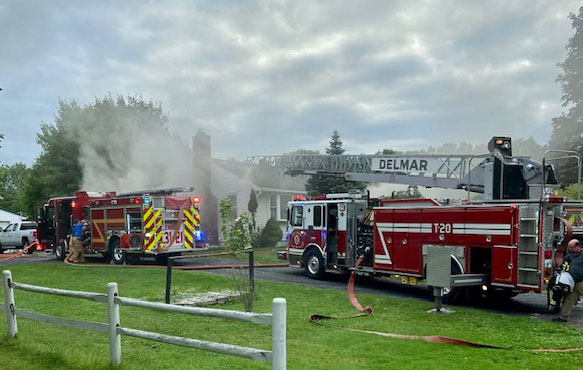 DELMAR – On Wednesday, Sept. 7 at 5:43 p.m. Delmar, Slingerlands, Elsmere and Westmere fire departments responded to a report of a structure fire at 489 Orchard Street.

Firefighters quickly realized they needed a two-prong approach to what was an active fire.

“Upon arrival, we had heavy smoke coming from the B side of the structure and we had a report of seven puppies trapped in the house,” Delmar Fire Chief Dan Ryan said.  “We made entry at two points into the house to rescue the puppies and extinguish the fire.”

According to Ryan, firefighters could not gain entry through the front door and had to remove a first floor window to reach the puppies and at the same time, enter the basement on the other side of the house to extinguish the fire.

Luckily, the response from the three departments gave Ryan and Delmar Assistant Chief Dave Languish enough staff to achieve both tasks. Ryan handled the rescue and Languish led the attack on the fire.

“This was a coordinated fire attack and rescue. We successfully rescued seven puppies and the mother dog along with extinguishing the fire very quickly,” Ryan said. “The rescue would not have been possible without the entire team doing exactly as they did this afternoon.”

All the puppies were alive after the rescue, but one did die at the scene. All of the puppies and the mother dog were taken to an emergency animal clinic in Latham. According to Ryan he called the clinic on Thursday morning and all the dogs were doing well.

There were no other injuries reported from the fire. Bethlehem Police are investigating the cause of the fire. Preliminary reports point to an electrical problem in the basement that caused the fire according to Bethlehem Deputy Police Chief James Rexford.

“The fire does not appear suspicious and the cause appears to be caused by an electrical issue,” he said.

Bethlehem EMS also responded to the incident and provided aid to the animals.

To view the gallery click on an image below or if you are viewing in a news app, click here. Photos by Tom Heffernan, Sr.

Altamont man arrested for a second incident of SWATTing in 2022