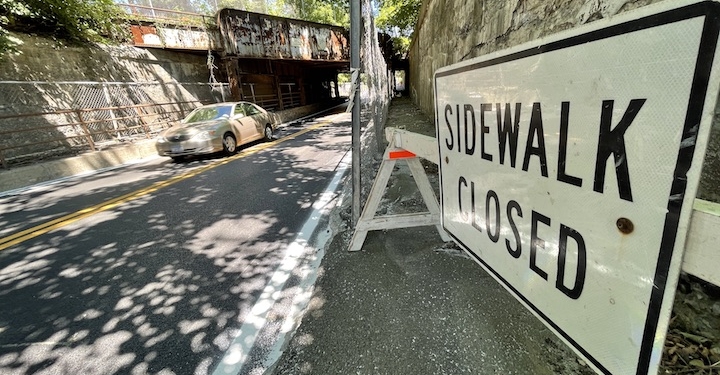 ALBANY — County Legislators agreed to pay the impending costs for moving fiber optic lines that run the length of the former railroad bridge it plans to replace over New Scotland Road in Slingerlands.

Legislators voted unanimously to approve the agreement on Monday, Aug. 8, committing the County to pay up to $250,000 to have Sprint Communications Company move the lines that now run underneath the Albany County Helderberg-Hudson Rail Trail as it spans across the road.

The bridge, a 100-year-old relic from the Delaware and Hudson Railroad, has been slated for replacement but litigation has precluded those plans from moving forward.

According to the agreement, Sprint will first suspend the communication lines onto utility poles this fall, allowing the County to proceed with bridge construction next spring. Once the new bridge is constructed, the communications company will secure the fiber optic lines to the outside of the new span.

The terms of the agreement expire at the end of next year, at which time the $1.9 million bridge should be complete. According to a letter from County Commissioner of Public Works Lisa Ramundo, the relocation costs will be paid with bond money already tied to the bridge construction.

Over the years, the current bridge has weathered the abuse of time and modern-day traffic. Knarled support beams reveal the scars from misguided commercial trucks ignoring signs indicating the span’s height of 11 feet, 2 inches. Crumbling cement has led the County to close both sidewalks that run adjacent to New Scotland Road.

The County had obtained the bridge in 2008 despite a report that deemed the metal structure and surrounding concrete to be in poor condition. The span has since been incorporated into the popular rail trail, used by pedestrians and bicyclists between Voorheesville and Albany.

The latest agreement is a byproduct of a similar pact made in 2015 after Sprint contested the County’s plan to pave the trail. The communications company then said the blacktop would sever access to its fiber optic lines and argued it would cost over $300,000 to move them. Both parties came to terms before the path was paved under the condition that if there were any changes the two would meet in arbitration.

Two years later, the County was prompted to make temporary repairs following a New York state Department of Transportation report that warned the bridge’s “load carrying capacity” was in danger.

The County selected a new, $1.9 million two-girder bridge to replace the aging, 42-foot long span in 2019. The proposed project would also raise the structure to 15 feet, 6 inches above the roadway to meet state requirements.

Construction was slated to begin in the summer of 2020; however, the outbreak of COVID-19 that spring halted those plans. Sprint soon followed with a suit against the County, which could not be processed in court with pandemic-related shutdowns.

In 2019, the County estimated that the bridge was struck nine times over the preceding 11 years. A Queensbury motorist was arrested in 2021 after driving the cement truck he was operating into the bridge. The truck was lodged underneath the bridge for hours, causing the roadway to be closed before the truck could be removed.

The new construction is expected to allow the neighboring Slingerlands Fire District to travel under the bridge, improving response times. The southern sidewalk on New Scotland Road will be removed, allowing for an ADA-compliant sidewalk on the opposite side. The wider roadway should also provide shoulders for cyclists.