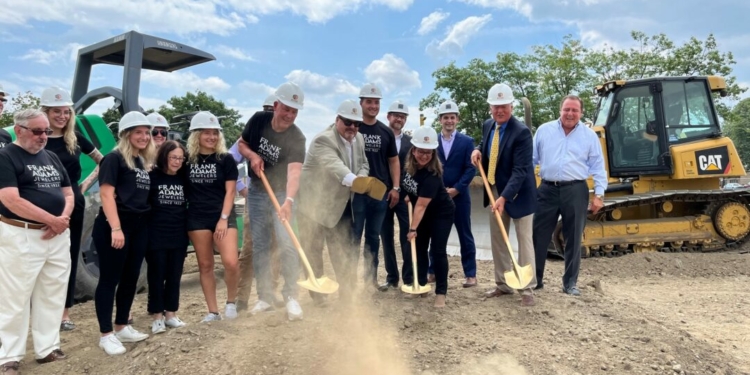 The 100-year-old, fourth generation jeweler that specializes in high-end items like Rolex watches, had been located in Stuyvesant Plaza. It will occupy one of two buildings being constructed at 142 and 144 Wolf Road, between Pier 1 Imports and LongHorn Steakhouse.

“We have adapted to change from our original location in downtown Albany to our current store in Stuyvesant Plaza, and now we are ready for the next chapter,” said Kimberly Adams Russell, president and CEO. “We feel that a freestanding building allows us not only the space we need, but the freedom to explore improvements to the customer experience.”

There will be two buildings constructed, one a 7,500-square-foot, stand-alone that will double the size of the current jewelry store in Guilderland. The second, 5,750-square-foot building, will house two tenants. Half of the building is leased while the other half is not as of yet. Between the buildings will be a court yard.

The 1.5 acre-site near the intersection of Cerone Commercial Drive, is owned by developer and entrepreneur Tom Burke. It is the former home of the Lazare auto store and a plan to redevelop the site was approved in 2018. A Longhorn Steakhouse was built on the south end of the site and opened in 2019. The two buildings currently in front of the Planning Board would be on the north end of the site. There is an approved Hyatt Hotel, but construction has been delayed because of the COVID-19 pandemic and the impacts it has had on the hospitality industry.

Construction of the new buildings will take place over the next several months and Frank Adams is expected to open the doors in spring 2023.

The jewelry store started by Frank Adams in 1922 as a watch repair shop on North Pearl Street in Albany. Today, Frank Adam’s son, David Adams, his granddaughter, Kimberly Adams Russell, and his great-grandson, Jeffrey Adams Russell, operate the store and manage a team of 20 employees.

“We have been at three locations in 100 years. This location fits where we want to be for the next 100 years,” Jeffrey Russell, one of the owners of Frank Adams, told the Planning Board on Tuesday, March 8. The project was only in front of the Planning Board once — rather than the typical three times — and there were concerns about the rear of the buildings facing Wolf Road with parking and the main entrance facing away from one of the Capital District’s main thoroughfares.

That issue was rectified and the Planning and Economic Development Department signed off on the plans late last month.