POLL: Hochul has a 14-point lead over Zeldin 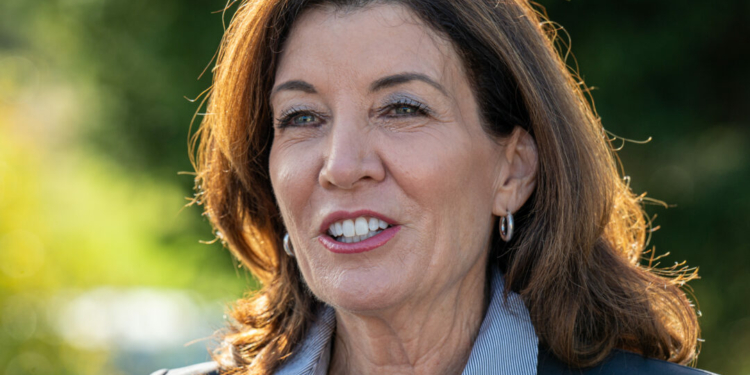 Gov. Kathy Hochul answers questions from the press prior to a rally held by Colonie Democratic Party candidates and other Capital District Democrats at Kross Keyes Drive in Colonie on Saturday, Oct. 23, 2021. (Jim Franco/Spotlight News)

LOUDONVILLE — With Election Day about three months out, Gov. Kathy Hochul has a 14-point lead over challenger Lee Zeldin, according to a recent poll by the Siena College Research Institute.

The former lieutenant governor, who was elevated to the position when Gov. Andrew Cuomo stepped down in disgrace, has never run for the office. The Democrat does enjoy a more than 2 to 1 enrollment advantage and holds a 53 to 39 percent, according to the poll.

Among the all-important independent voters, or those 3 million people not enrolled in any party, Zeldin holds a two-point lead 44 to 42 percent.

Just 7 percent of those polled say they still do not know who they will vote for.

“Less than 100 days until election day, Hochul has a solid 14-point lead over Zeldin, a reflection of the Democrats’ large enrollment advantage in New York,” said SCRI pollster Steven Greenberg.

Hochul dominates in New York City, leading by nearly 50 points, while Zeldin has slim three-point leads both upstate and in the downstate suburbs, Greenberg said. Men are evenly divided and women favor Hochul by a 59 to 33 percent spread. While white and Latino voters favor Hochul by six and eight points, respectively, Black voters support Hochul 78 to 8 percent.

Meanwhile, Hochul has a 46 to 41 percent favorability rating this month among likely voters, compared to 46 to 37 percent in June among registered voters. Hochul has a 52 to 41 percent job approval rating, the first time Siena has asked Hochul’s ‘job approval,’ replacing the previous ‘job performance’ question.

Zeldin now has a 31 to 28 percent favorability rating, with 41 percent either having no opinion or never heard of him, up from 22 to 57 percent in June.

“Hochul continues to be more well-known and liked than Zeldin, although she has not been able to raise her favorability rating over 46 percent,” Greenberg said. “Hochul has an early — but certainly not insurmountable — lead. In fact, while Democrats have taken the last four gubernatorial elections, Zeldin’s current 14-point deficit matches the closest Republicans have come in those races, when Cuomo defeated Rob Astorino 54-40 percent in 2014. In August 2014, Cuomo led Astorino by 32 points, 58-26 percent.”

Other incumbent Democratic Party candidates running for statewide office hold solid leads over their Republican opponents. According to the poll:

At the same time, 50 percent of the voters think New York state is headed in the wrong direction with 36 percent who say it is on the right track and 14 percent who say they don’t know or don’t have an opinion.

Voters oppose the recent Supreme Court decision to overrun Roe v. Wade and eliminate the constitutional right to abortion, 68 to 25 percent. By a larger 74 to 21 percent margin, voters say abortion should be always or mostly legal, as opposed to always or mostly illegal.

“Prior to the Supreme Court decision in Dobbs, New Yorkers said they wanted the Court to uphold Roe 60 to 24 percent. Today, 68 percent say they oppose the decision to overturn Roe, eliminating the constitutional right to abortion,” Greenberg said. “Although a small majority of Republicans support the Dobbs decision, it is opposed by 89 percent of Democrats, 60 percent of independents, and at least of 62percent of voters from every region, age group, gender, and race.”

Independents say they favor Republicans taking control by 2 percentage points, 45 to 43 percent, with 12 percent saying they don’t know or don’t have an opinion.

Seventy-three percent of New York City voters favor Democrats keeping control while Republicans are favored among downstate suburbs by a point, 47 to 46 percent, and upstate 48 to 47 percent.

“As in all of the statewide races, there is a gender gap here as well, with men being closely divided and women supporting Democratic control by 28 points, Greenberg said.”

By an overwhelming 82 to 15 percent margin, voters support a new law expanding eligibility requirements for obtaining a permit to carry a concealed weapon — including background checks with character references and safety training, according to the poll.

Sixty-three percent say they favor requiring businesses that allow concealed weapons to put a sign on the door telling other customers of their policy compared to 32 percent who oppose.

“Support for the new law expanding eligibility requirements to obtain a permit to carry a concealed weapon — background checks with character references and firearms safety training courses — is through the roof with all demographic groups,” Greenberg said “In fact, the ‘lowest’ support is with conservatives, who favor the new law 71 to 27 percent”.

The SCRI poll was conducted between July 24 and July 28 among 806 likely voters in New York state. It carries a margin of error of +/- 3.5 percentage points.