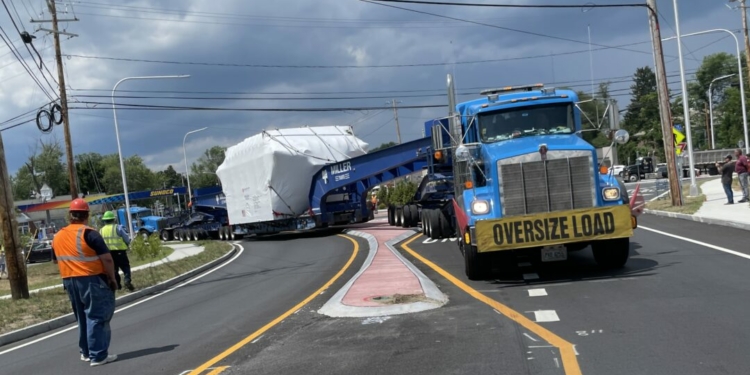 GLENMONT – A cadre of utility crews and law enforcement aided the transport of a nearly 500,000-pound load through the roundabout en route to the Port of Albany on Thursday, July 28.

The 495,000-pound naval reactor started its orchestrated jaunt across town from Cairo at about 9 a.m. State police controlled traffic across both lanes of Route 9w while utility and highway crews scrambled to extract traffic signs and power lines that were in the way.

Standing approximately 25 feet tall, bucket trucks often sped ahead of the convoy to lift traffic signals high enough for the transport truck to pass under.

The convoy trekked north to the Glenmont Roundabout, where it turned off onto Glenmont Road before it reached River Road and finally the port.

A group of road signs within the circle had to be removed to allow the truck’s cab to drive up and across islands to negotiate the turn.

According to State Police, the naval reactor is destined for a naval base in Connecticut.

Motorists around the roundabout were halted for approximately 30 minutes before traffic returned to normal.