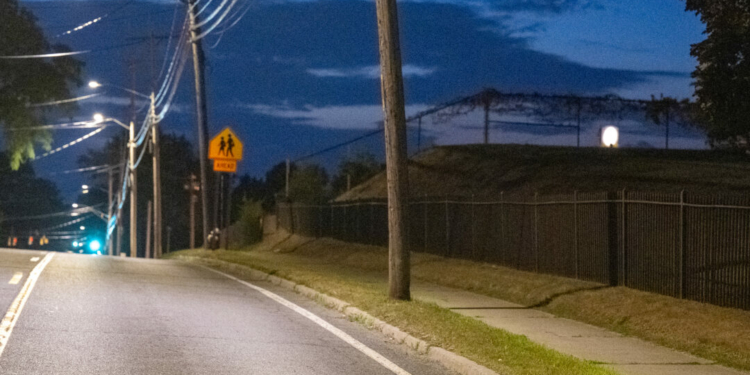 The gravestone of Frederick Wheeler along Sand Creek Road during the night. Jim Franco / Spotlight News

COLONIE — The first dozen or so graves at St. John’s Lutheran Cemetery sits on top of the hill next to Sand Creek Middle School, one of the most popular sleigh riding hills in the Capital District.

The gravestone nearest to the road is eerily lit up at night, and while the stone is worn by more than a century of upstate New York weather, it appears to be memorializing Frederick Wheeler, who died in 1895.

Bob Curtis, the cemetery caretaker, said a man showed up a little more than year ago and wanted to clean up the stones, some of the first bodies interred at the cemetery that has been interring bodies since 1873.

“He put that light on the stone and it does look kind of cool from the road so I left it,” he said. “I think maybe it works periodically, and it must work on a sensor and so when it does turn on it turns on by itself and it turns on at night.”

The light isn’t always on, and Curtis said he doesn’t remember the name of the man who cleaned the stones, but he also cleaned stones at Graceland Cemetery and has volunteered his services across the Capital District.

Since the man cleaned up the stones, though, Curtis said he maintains the area — which sits atop an old vault that was used to store bodies when it was too cold to dig graves when they were dug by hand — like he does the rest of the well-kept cemetery.