Poll: Most not happy with Supreme Court 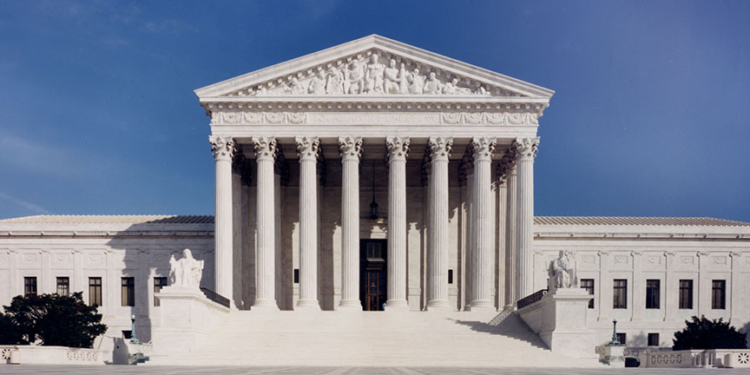 LOUDONVILLE — The majority of people, 53 percent, view the Supreme Court unfavorable compared to 41 percent who have a favorable opinion of the nation’s highest court, according to a recent Siena College Research Institute/New York Times poll.

According to the same poll, 77 percent of New Yorkers think the country is headed in the wrong direction and 13 percent think it is on the right track but 60 percent are very (17 percent) or somewhat (43 percent) are optimistic things will get back on track within the next decade.

“Current views of the Supreme Court appear to be largely determined by partisanship. Republicans overwhelmingly view the court favorably, while Democrats have an even stronger unfavorable view of the court,” said Don Levy, SCRI director.

There is also a wide age divide, as voters 45 and older largely have a break-even view about the court, while about two-thirds of those under 45 view the court unfavorably.

By a large majority, 61 to 29 percent, voters oppose the court’s recent decision to overturn Roe v. Wade and eliminate the federal protection for a woman to have an abortion. Voters oppose 61 to 29 percent the recent Supreme Court decision that overturned Roe v. Wade and eliminated the constitutional right to abortion. A slightly larger 65 to 26 percent majority say that abortion should always (33 percent) or mostly (32 percent) be legal, rather than mostly (20 percent) or always (6 percent) be illegal.

Voters are virtually evenly divided on which party they want to win control of Congress this year, with 41 percent saying Democrats and 40 percent Republicans.

“If the election to fill congressional seats were happening now, it would all come down to turnout since the race could not be any closer,” Levy said. “By a margin of 90 to 4 percent Republicans say they want to see the GOP win control of Congress. By the same 90 to 4 percent margin, Democrats want their party to retain control of Congress. Independents are divided down the middle with 35 percent for the Dems and 34 percent for the Reps.”

Previously released, voters thought Trump went so far as to threaten American democracy, not just exercise his right to contest the election, 55 to 39 percent. New questions show that by 49 to 42 percent, voters say that the Jan. 6 Capitol riots were an attempt to overthrow the government, not simply a protest that got out of hand. And by 49 to 40 percent, voters say Trump committed serious federal crimes in the aftermath of the 2020 elections.

“The ideological lines couldn’t be more clearly drawn — 72 percent of Republicans say the riots at the Capitol were just a protest that got out of hand, and 80 percent say Trump did not commit serious federal crimes after the 2020 election,” Levy said. “But 84 percent of Democrats say the riots were an attempt to overthrow the government and 89 percent say Trump committed serious crimes. Independents tilt toward the Democrats but by much narrower margins.”

Americans overwhelmingly believe that voting makes a difference in how government works — including 81 percent of Democrats, 75 percent of Republicans and 57 percent of independents, according to the poll.

While more than two thirds of people 30 and over believe voting matters, those under 30 are virtually evenly divided, with 48 percent saying voting doesn’t really make a difference.

By 53 to 41 percent, voters say America’s political system is too divided politically to solve its problems.

• A majority think America’s system of government needs to be completely replaced (8 percent) or in need of major reforms (50 percent) compared to just 29 percent who say minor changes are needed and 11 percent who say no change is needed.

• 34 percent of voters say they are confident in mainstream media organizations to accurately and fairly report about news and politics while 65 percent are not too confident (23 percent) or not at all confident (42 percent.)

• 92 percent say they are likely to vote in November

This New York Times/Siena College survey of 849 registered voters nationwide was conducted from July 5 to July 7. It carries a margin of error of +/- 4.1 percent.

Spotlight on Business 2022: Quality, supply is the name of the game