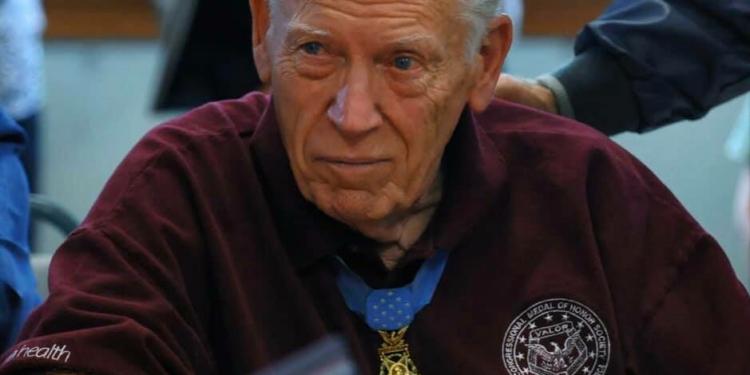 DELMAR — As World War II neared its end, Allied forces were attacked by German troops in the Ardennes region of Belgium, Luxembourg and France at the Battle of the Bulge. Among the Allied soldiers in Belgium was Francis S. Currey—a New York native who would move to Selkirk in the later years of his life.

He was awarded the U.S. Medal of Honor, as well as three Purple Hearts, the Belgian Order of Leopold, a Silver Star, and a Bronze Star for his role in the Battle of the Bulge. Now, Currey is being recognized at a local level.

On Monday, June 6, American Legion Post 1040 added Currey’s name to accompany that of Nathaniel Addams Blanchard, who the post was originally dedicated to in 1931. Additionally, at the request of the Commander of American Legion Post 1040, Lyle Maddock, this legislative session featured a bill that will ceremonially rename a portion of State Route 32 as “Medal of Honor Recipient Francis S. Currey Memorial Highway.” The bill was sponsored by Senator Neil Breslin and Assemblymember Patricia Fahy.

According to the Senate Bill, this designated area will be between Route 32’s intersection with Bender Lane and its intersection with Elsmere Avenue in Bethlehem. The bill passed in the House and Senate but has not yet been signed into law by Governor Hochul.

“We are grateful for our veterans’ service in defending the liberties and freedoms we all hold dear,” said Assemblymember Patricia Fahy. “Francis ‘Frank’ Currey of Selkirk is one of those who went above and beyond the call of duty — he received the Congressional Medal of Honor for his valor and bravery in WWII’s Battle of the Bulge, singlehandedly halting a German advance and rescuing his comrades.”

The Senate bill states that Currey enlisted in the U.S. army one week after his high school graduation in 1943. His role in the Battle of the Bulge, as noted by Assemblymember Fahy, resulted in the rescue of five American soldiers who were pinned down by German forces.

According to the National WWII Museum, he accomplished this rescue while under heavy fire from German artillery and an incoming tank, which he took out using a bazooka, though there were more headed his way. Currey then navigated through continual gunfire and managed to singlehandedly disarm the three remaining tanks with grenades.

Following the war, Currey married his wife, Wilma, and took a job with the Veteran’s Affairs Hospital in Albany as a counselor. He died in Selkirk, NY, on Oct. 8, 2019.

“Francis Currey’s service to our nation during WWII was remarkable and inspiring,” said Bethlehem Town Supervisor David VanLuven. “It is more than fitting to honor his legacy by naming part of Route 32 for him, and I am grateful to Assembly member Pat Fahy and Senator Neil Breslin for leading this effort.”

By sponsoring this bill, Breslin and Fahy said they hope to preserve Currey’s legacy so his heroism is not forgotten.

“I was proud to work in tandem with the bill’s Assembly sponsor, Assemblymember Patricia Fahy, American Legion Post 1040 in Bethlehem, and Francis Currey’s family to pass this bill…” said Senator Breslin. “As a token of our state’s appreciation for his service, we have renamed and dedicated a portion of State Route thirty-two as the “Medal of Honor Recipient Francis S. Currey Memorial Highway” so no one ever forgets his name or his contributions to the protection of our nation.”

BC ranked No. 1 by Albany Business Review, again