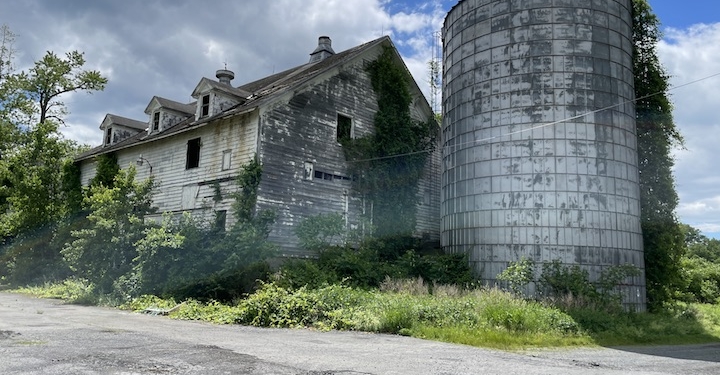 GLENMONT — The Town Board is considering the purchase of more than 300 acres of farm and woodlands — including three of the four corners at the Route 9W and Wemple Road intersection — at an apparent $1 million discount.

Under the proposal presented by Town Supervisor David VanLuven, the Town would purchase 307 acres land with $3 million coming from various municipal funds, avoiding a municipal bond or any additional taxes. The aggregate value of the nine parcels was appraised at $4,032,500 in February by Schecter Valuation Services, LLC, a company commissioned by the Town.

The town supervisor said the land purchase would be one of the most significant farmland conservation efforts in Hudson Valley area.

VanLuven said the opportunity first presented itself when George Hasoetes walked into his Town Hall office three years ago and asked if the Town would be interested in buying the land. VanLuven, an environment advocate before joining the Town Board six years ago, said the idea had aligned with the Town’s long-term goal for greenspace preservation.

“If we want to continue to have farm and forests and other green spaces in town, we need to step up, take responsibility, work with interested landowners and pay for them,” VanLuven said as he presented the proposal before the Town Board on Wednesday, June 8. “Because if we don’t, it will probably be developed.”

The Town Board voted unanimously 4-0 to use $30,000 from the Farms and Forests Fund to secure a 3-month option that will allow the Town to investigate due diligence on the properties, including environmental assessments and title checks.

Money for the proposed purchase would come from four of the Town’s funds; Farms & Forests, General and Capital Reserve, American Rescue Plan, and Park Land Set Aside. An itemized breakdown was not provided Wednesday night. In a statement released Friday, the Town stated it would draw $2 million from its Farms & Forests Fund and the remainder from capital accounts.

One resident asked during public comment what the Town planned on doing with the land once spending the money on purchasing it. The immediate benefit, VanLuven explained, would be to place agricultural easements on it, preventing development and preserving the area’s agricultural character.

“Keeping these parcels as a working landscape will help to avoid increased traffic,” VanLuven said. The Town estimates that should the same land be left open for residential development, it would add an additional 1,000 vehicle trips at the Route 9W and Wemple Road intersection during the evening peak hour.

VanLuven said other land-use options to explore would be to designate one of the parcels for a future park, sell the land with aforementioned use restrictions, partner with nonprofit farm organizations or rent parcels to farm operators — which is presently done on eight of the nine parcels.

The Hasoetes family was listed among the richest families in the country by Forbes Magazine in 2015. The family had previously owned and operated 600 Cumberland Farms convenience stores and provided gas to 2,500 Gulf stations throughout the east coast. With a combined worth of $3.9 billion, the family was named among the Top 100 wealthiest in America.