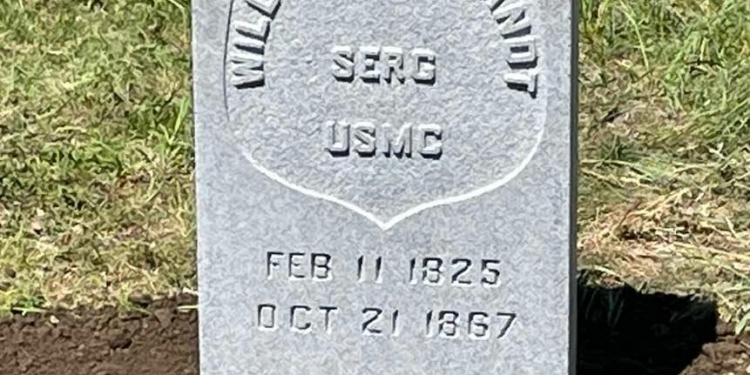 MENANDS — A Civil War soldier is now properly at rest.

William Van Zandt was born in Albany in 1825 and likely spent much of his youth on the Van Zandt farm located near the present site of the Academy of the Holy Names. Later, he resided with his brother in the city proper and was employed as a cigar maker.

In 1859, he joined the U.S. Marine Corps and was assigned to the Brooklyn Navy Yard. During the Civil War, he served aboard the USS Michigin, the USS Princeton, and the USS Constellation.

Following the war, while serving temporarily aboard the USS Florida, he became ill with cholera and was sent to quarantine aboard the USS Potomac at Philadelphia. Less than two weeks after taking ill, Sgt. William Van Zandt died aboard ship at the age of 42.

Van Zandt was buried in Philadelphia’s Mount Moriah Cemetery. Two years later, his family arranged to have his remains returned to Albany. He was buried in the Van Zandt family plot of the Albany Rural Cemetery in Section 26, Lot 51 on Aug. 18, 1869.

Unfortunately, his grave here was never marked but a military headstone was placed on his former grave in the U.S. Navy Yard Section at Mount Moriah.

A 2010 application to have a military headstone placed on his grave was unsuccessful as there was insufficient proof of his re-interment at Albany Rural.

In 2021, the necessary proof was found, in the form of an original ledger entry for his re-burial here by Albany undertaker J. Owen Moore.

A headstone was successfully applied for and his final resting place is now marked with the proper headstone that reflects his military service.

Photo and information from the Albany Rural Cemetery.