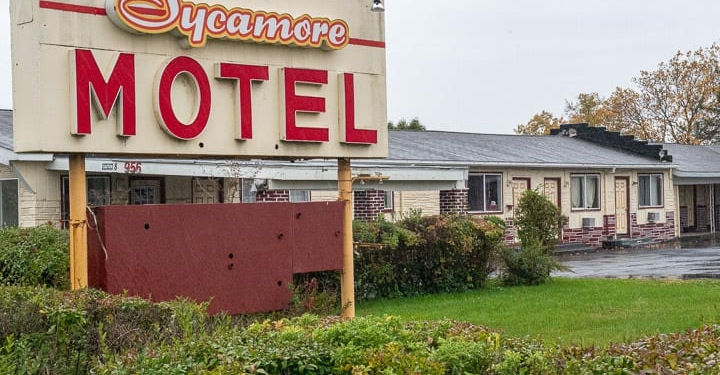 COLONIE — The Sycamore Hotel on Loudon Road could soon be razed and replaced with a Stewart’s.

The plan would combine all or portions of three lots, which Stewart’s would purchase to construct a 3,975-square-foot mini mart with two canopies covering 16 fueling stations. There would also be six charging stations for electric vehicles.

In addition to the still active hotel at 956 Loudon Road, the 2.2-acre plot of land currently zoned Highway Commercial Office Residential, includes 2 Autopark Drive, which is currently home to a car wash once used by the Nemith car dealership and a vacant chunk of land at 954 Loudon Road.

The proposed Stewart’s would be similar to the one recently built on New Karner Road in Guilderland near the City of Albany line.

Most of the discussion at the Planning Board meeting last month was about access onto Route 9 and Autopark Drive, now known as Wellness Way.

As proposed, there is a full access onto both roads, but Joe Grasso, the Town Designated Engineer for the project, said it would probably be better to limit access onto Route 9 to right in and right out only. Planning Board Chairman Steve Heider, not a fan of one-way ingress and egress because not everyone abides by the directive, said there needs to be some consistency now that there are more projects before the board along Route 9.

He pointed to, for example, a Speedway convenience store located across Route 9 from the proposed Stewart’s that has two curb cuts onto Route 9 that allow full access.

The orientation of the building, the appearance of the sides other than the front and other nuances were briefly discussed but generally, the project was well received.

“I commend Stewart’s for bringing forth a redevelopment project rather than a greenfield project,” Grasso said. “In general, we are supportive of this type of development on this type of lot.”

The project, presented by Tyler Fronte, a representative of Stewart’s, was a sketch plan and it will need to come before the board at least twice more before construction can begin.

In 2019, the town issued 24 citations to the owner of the Sycamore Hotel, Suman Patel, for allowing the business to be used for long term housing and for offering substandard conditions to the tenants.

Some tenants had lived there for more than a year and others had 965 Loudon Road as the address on their driver’s license. At the time, the motel’s records showed residents were paying $50 per day, or approximately $1,500 per month, for rent.

It is the second hotel along Route 9 that could be razed. Earlier this spring, a developer proposed a plan that would knock down the dilapidated Karl’s Motel. The Planning Board, though, gave a cool reception to the project by Fred Sharifipour to build a nine-unit townhouse and self-storage buildings on two lots, 1129 and 1133 Loudon Road.

It not clear when, or if, that project will come back before the board.

Make-A-Wish in search of new CEO